Back in the last week, Honor unveiled the Honor 20 Lite with a Kirin 710F SoC and triple rear cameras. Besides that, the smartphone came with a large 4,000mAh battery. According to the Honor 20 Lite official information, this battery charges via a 22.5W fast-charging system. However, it seems that the handset can go even beyond 22.5W if you have a more powerful charger.

Earlier today, a popular blogger in China tried charging his Honor smartphone with Huawei’s 40W SuperCharge fast charger. To his surprise, the smartphone displayed the ‘SuperCharging’ text on the screen, with the decimal points in the charging percentage. This started to lift speculations that the phone was charging at more than 22.5W. 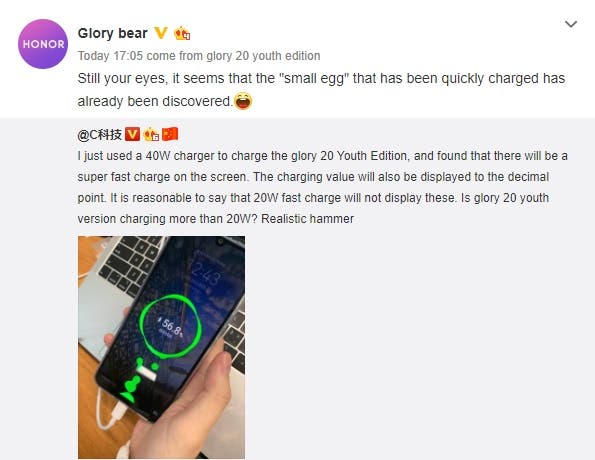 Soon after this post, Honor’s VP, Xiong Junmin, confirmed that the 20 Lite charges at more than 20W. However, he didn’t give us an actual figure of the charging specifications. For that reason, we don’t know how faster it can go, and there’s no confirmation if it can reach the 40W charging peak.

Honor 20 Lite owners can purchase Huawei’s 40W SuperCharge fast charger if they aren’t happy with the stock results. The 22.5W charger is capable of charging the smartphone from 0 to 53% on 30 minutes. Since we’re talking about a 4,000mAh, the result is still positive.