It has been a long road since Oppo launched Realme in an independent journey. The sub-brand fastly got a place in the heart of Indian customers with its powerful-capable smartphones and good value for money. This year, the company established its presence and started its international campaign. One of Realme’s latest achievements was the release of Realme X2 Pro, its first flagship handset. According to Counterpoint’s Q3 2019 Global Smartphone Shipments report, Realme was the fastest-growing smartphone brand. Besides, the company appeared on the top 10 chart, sitting at the number 7 spot.

According to the research,  Realme crossed the 10 million shipments milestone during the July-September period. That results in a jaw-dropping 808% year over year growth. Thus giving the crown of fastest-growing smartphone brand to Oppo’s subsidiary. The result is even more impressive when we take in account that overall smartphone global shipments are reaching a slowdown. Earlier this year, Realme announced it passed the 17 million user mark in less than two years of existence. 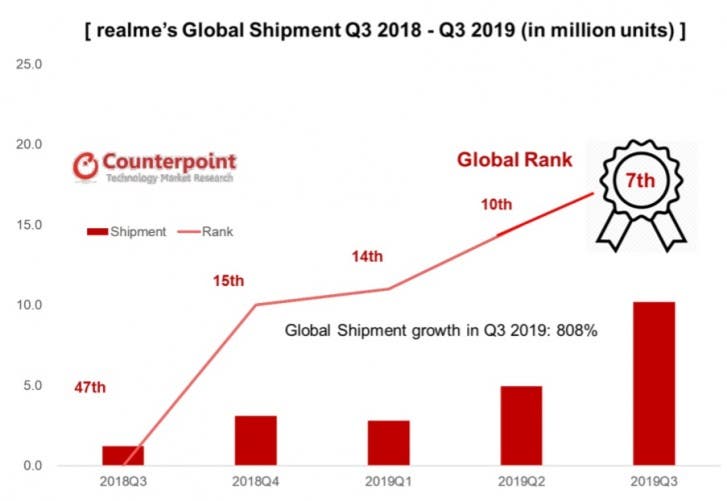 Looking at the other companies, Samsung has kept its place at the top. The South-Korean firm is followed by Huawei and Apple. Xiaomi and Oppo and Vivo occupied the other three spots ahead of Realme. Overall, it’s a good result for Oppo, and even better for the BBK-Group. The Chinese conglomerate is behind the activities of Oppo, Vivo and OnePlus.

Realme wants to expand its positive results with the arrival of 5G smartphones. The company is available in 20 countries across Europe and Asia.

Next Xiaomi TV 5 annual flagship to arrive on November 5