The rumors and leaks are all now confirmed. Chinese smartphone maker Xiaomi is prepping a Pro version of the Mi CC9. Dubbed Xiaomi Mi CC9 Pro, the upcoming device will be launched in  Beijing, China on November 5th alongside the Mi TV 5, and Xiaomi’s first smartwatch.

While there are speculations the brand is right now working on four smartphones with a 108MO snapper, the firm via a Weibo post today confirmed that the Xiaomi Mi CC9 Pro will feature the 108MP camera. And, perhaps, that suggests it will be the first. Besides confirming the launch date, and of course the Mi CC9 Pro moniker, the Chinese giant also released a poster that gives us a sneak peek at the upcoming device.

Of course, the Xiaomi Mi CC9Pro will arrive as yet another camera studded smartphone. From the triple camera arrays on the CC9, the launch poster reveals Mi CC9 Pro will get a total of 5 cameras on its rear panel. As pictured below, the cameras will come in a vertical setup – three lenses within the same ring, while the other two are separate. It is evident the device has a dual-tone LED flash, while it is also clear the CC9 Pro will land as the first in Xiaomi’s lineup to feature 5x optical zoom. 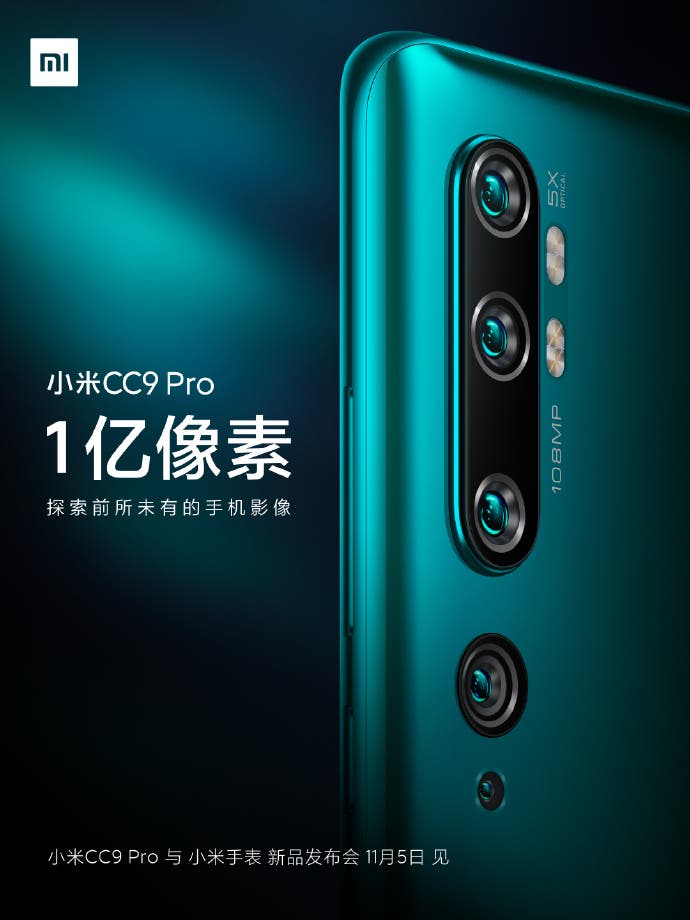 Beside the camera setup, we can get confirmation that the main sensor is a 108MP sensor. There is evidently no fingerprint scanner on the rear, so it is safe to say the device will retain the CC9 in-display fingerprint sensors, and perhaps, a  ‘Dot’ notch above the screen.

Some rumors from earlier suggested the Xiaomi Mi CC9Pro will have a Snapdragon 730G chipset, a triple rear camera, a 32MP camera snapper, and a 6.4″ display. A purported full spec list also surfaced some days ago. But we would have to wait for some more official teasers since no one predicted the device will get a Penta-camera setup.