Recently, Canalys released the latest report. According to it, global smartphone shipments were increased by 1% in the third quarter of 2019. This is for the first time in two years to achieve year-on-year growth.

Also Read: Global Smartphone Shipments Will Decline By 3.7% In 2019

The report also says the global smartphone shipments in the third quarter were 352 million units. Last year, it was 349 million units. Although this growth is not large, it has broken the downward trend since 2017, when the smartphone industry experienced the first decline in sales in history. 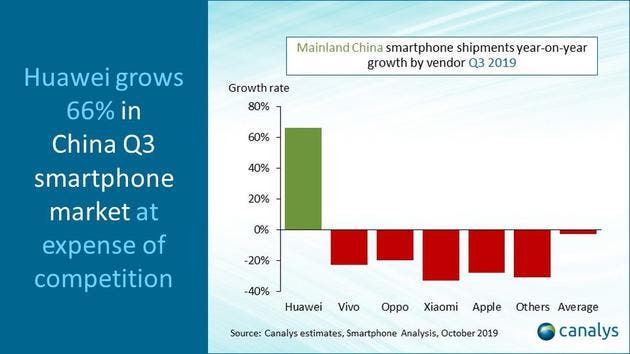 In the third quarter, Samsung’s global smartphone shipments still topped the list. And the company’s market share was increased by 2 percentage points compared to the third quarter of 2018. However, Huawei has taken a considerable share from Samsung, rising from 14.9% in the same period last year to 19%, only 3.4% behind Samsung.

Among other companies, Apple’s share in the global market dropped from 13.4% in the same period last year to 12.3%. This means that the company’s smartphone shipments fell by 7% overall, largely due to the iPhone XR released last September. Sales performance of iPhone XS and iPhone XS Max is weak. Canalys pointed out that if Apple releases only two new iPhone models as usual, its shipment figures may be lower. It’s no secret that Apple’s iPhone sales have been falling. That’s why Apple’s service revenue has doubled. 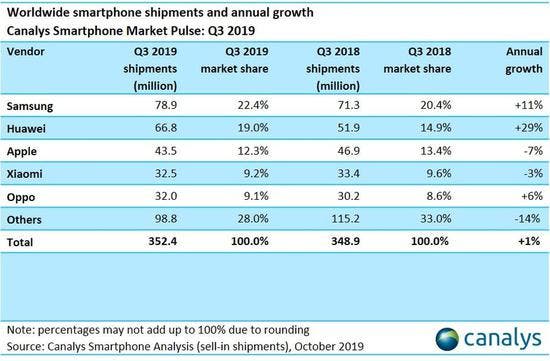 Samsung’s shipment growth can be attributed to many factors, including the introduction of more new models and the diversity of its high-end devices. For example, the Galaxy Note10 is equipped with two screens for the first time in addition to the 5G support. According to Canalys, the Samsung Galaxy A mid-range devices have a ‘better price-specification ratio’ and has also played a role in driving Samsung’s shipment growth. This product line includes the A80 phone, which is equipped with a lift flip camera. Samsung also released the A90 5G phone last month, further indicating that the 5G version of the phone will play an important role in Samsung’s sales.

‘5G is the next battleground for Samsung,’ said Canalys research director Rushabh Doshi. ‘It is one of very few smartphone vendors to design its own chipsets and modems. It is not, therefore, restricted to the innovation cycle of a third-party component supplier like Qualcomm. If Samsung moves faster than Qualcomm, it can win the race to mid-range smartphones with 5G.’

Next Apple is Losing Pricing Power: iPhone Average Selling Price is Too Low

Smartphone market is expected to grow despite component shortages

Despite supply pressure, smartphone shipments in 2021 will grow by 12%