We know the Huawei Nova 6 is set to hit the market on December 5. So it’s logical we will be getting news, leaks, and rumors concerning this handset in the coming days. Recently, the phone’s renderings were leaked on the net, showing its overall appearance.

If you remember, as early as a few days ago, andrei_eclynoh exposed the front rendering of the Huawei Nova 6 4G version. From the photo, we can see that there will be three color options. Later, as Slashleaks said the phone will come in gray, blue, and purple. 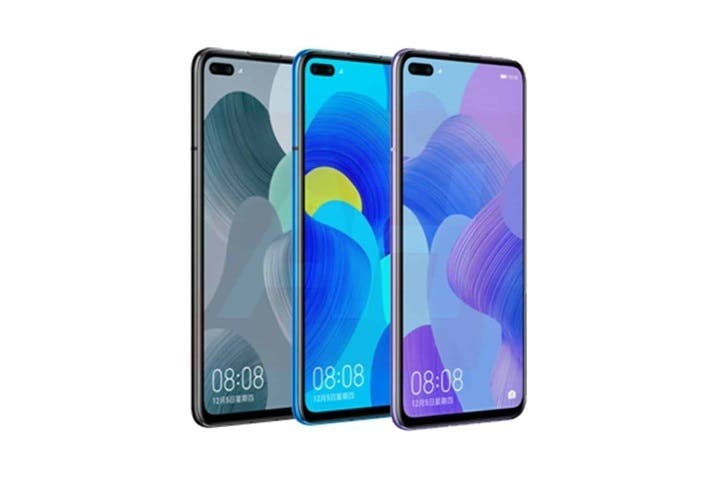 Also, as we can see the phone uses a double-punch-hole screen design. It is placed on the upper left area of the screen. Plus, the chin is way wider than the other three borders. According to the previous 3C certification information, the Huawei Nova 6 4G version smartphone’s model is ‘WLZ-AL10’. And it uses a 40W fast charging.

There is currently no information concerning the back panel design of the phone. And there are suggestions the 5G and 4G models will differ noticeably.  Some rumors say the Huawei Nova 6 5G version will use a glass gradient back panel design. And as no fingerprint sensor is seen at the back, there is every chance to see a screen fingerprint.

By the way, we have heard the Huawei Nova 6 will come with a side-mounted fingerprint recognition module. But this may refer to the 4G variant.

We guess the phone will come with at least three camera sensors on the back. It should include a 3D ToF sensor, and support laser autofocus and other functions.

Today, the phone got the network access license of the Ministry of Industry and Information Technology. So we are informed about most of its features. The 5G version will be equipped with Huawei’s own Kirin 990 5G chip. The latter is a flagship SoC launched in the second half of this year.

The Huawei Kirin 990 5G chip adopts the most advanced 7-nanometer and EUV processes. It is the first to integrate 5G modules into the SoC. It is also the world’s first mobile terminal chip with more than 10.3 billion transistors.