Slowly we are approaching that time of the year in which Honor presents a new flagship device on the market that partly anticipates the novelties of 2020 and shows the muscles before the others. The Chinese company now seems ready to launch on the market the new Honor V30, a smartphone that could say a lot already from this initial information that has revealed.

Directly from the hands of the president of Honor itself, Zhao Ming, came the first screenshots relating to the speed test performed by the smartphone under the 5G network to which it had connected. The phone is powered by the new Kirin 990 processor, which we will surely see also on the new Huawei P40 next year and which, we can say, will be tested well on this Honor model. 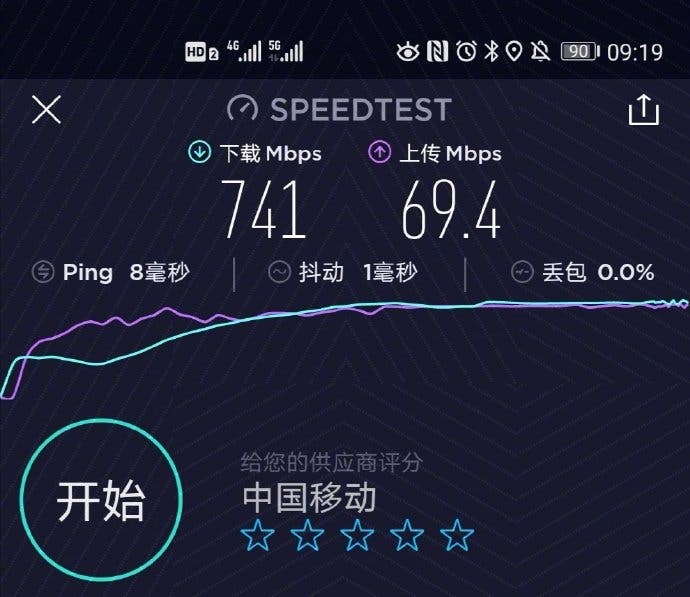 The numbers reached are in line with what were the expectations. You get 741 Mbps in download while doing a modest 69.4 Mbps upload. It is also noted that the telephone signal is high, which would also mean perhaps the position below one of these new generation towers. And for those wondering which operator they are, it is China Mobile.

There are no other news on the smartphone yet. There are rumors about the cameras and the design that could be very similar to that of the Mate 20 Pro. Four photographic sensors, one of 60MP and another of 16MP wide-angle. Alongside with a 2MP for macros and the much-talked-about complementary ToF sensor. Not an absolute novelty at 100% for Honor but certainly an extra quality step. That we would have been able to expect only after the release of the Mate 30 Pro, not before. We also expect the adoption of a 90Hz display. Like many of the other Android flagships that arrived in the course of these last weeks.

In short, there could be an interesting smartphone that we hope to see as soon as possible. The details that emerged speak of a presentation that could be between the end of November and the beginning of December in China. We do not know if these times will also be confirmed in other countries or not.

Next Qualcomm could launch Snapdragon 865 in December