Xiaomi’s sub-brand Redmi makes phones, mobile accessories, among other things. The spin-off brand back in August ventured into the Smart TV market with its Redmi TV, and as it stands, it appears the sub-brand might be venturing into the Smartwatch watch segment soon. Recall that the parent company Xiaomi a few days ago unveiled its first Smartwatch – the Mi Watch, and now it appears we would be getting a Redmi Watch soon. 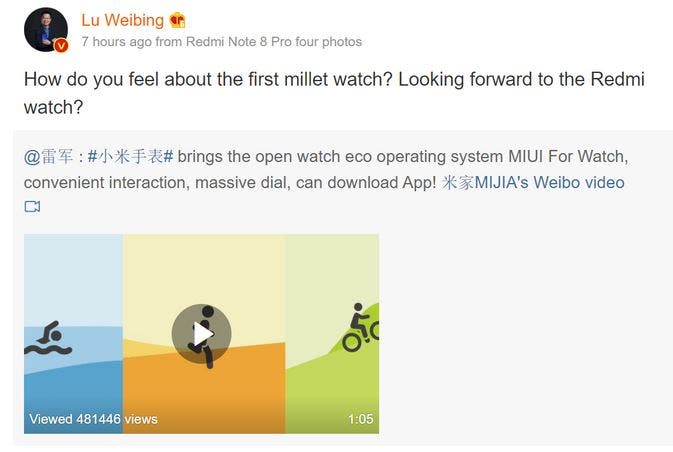 This isn’t a mere rumor, the hint comes from  Lu Weibing, General Manager of Redmi brand who took to Weibo to talk about the Mi Watch. The GM while extolling the features if the Mi Watch simply asked his followers what they think of a RedmiWatch; How do you feel about the first Xiaomi Watch? Looking forward to a Redmi Watch?. While that itself isn’t a confirmation that a Redmi Watch would soon be a reality, we are certain this marks the beginning of a series of teasers that will precede the launch of the RedmiWatch.

Details about the Watch are at the moment unknown. However, we the Redmi Watch to adopt a similar design as the Mi Watch. Basically, it could be a watered-down version of the Mi Watch, perhaps with a smaller display, while it could retain the physical button and a crown for easy navigation. The Rumored Watch might get a smaller battery size, perhaps with no support for eSIM, a feature that allows you use the Mi Watch independently of the device it is connected with.

As for the asking price, the rumored RedmiWatch will likely get a lower price tag, given that Redmi devices get cheaper price tag to compare to similar devices with the Xiaomi brand. We should hear more about the Redmiwatch in the coming days.