The renowned research firm IDC has just released its Q3 report for the smartphone market in India. The report covers smartphone sales between July and September and it shows around 46.6 million smartphone shipments. That’s 4 million more smartphones than the 42.6 million shipments achieved in the same period last year.

All top five companies have felt the growth in the market, except for Samsung which actually saw a decline in its market share. India’s smartphone market top five is made by Xiaomi, Samsung, Vivo, Realme and Oppo. Interestingly enough, Realme is Oppo’s subsidiary so it’s safe to assume that the Chinese company grabbed the fourth and five spots on IDC’s ranking. Things are even more interesting when we know that along with Vivo, these two brands are part of the Chinese BBK conglomerate.

IDC: Xiaomi is the king while Realme is the fastest-growing company

Xiaomi continues its dominance of the Indian market with an estimated shipment of 12.6 million units, representing an 8.5% yearly growth. Samsung comes second with a total shipping estimate of 8.8 million units. This is actually less than the 9.6 million units shipped the year prior. Vivo shipped an estimated 7.1 million smartphone with a hugely impressive 58.7% yearly growth. Realme was the fastest-growing company in the Global scene, and these numbers are also represented in the Indian market. 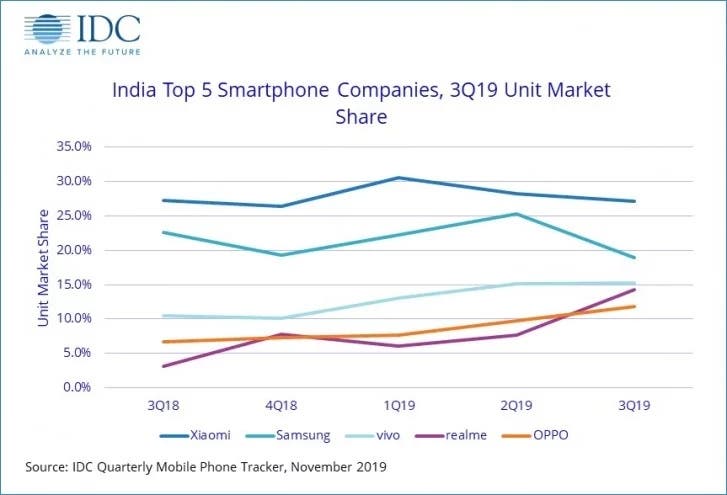 Realme shipped a huge 7.1 million units in Q3 2019, up from 1.3 million in the same period last year. This large number of shipments represent growth of 401.3%. According to IDC, the company’s most popular devices are the Realme C2, Realme 3 and 5 series. The research also states that the INR 14,000 ($200) and below accounted for 80% of all smartphone shipments in India for Q3. This can pretty much explain why Realme is so succesful there with many cheap and competitive offerings. When it comes to the flagship segment, Apple is king with a 51.3% share.  The fastest-growing segment is the INR 21,000 – 35,000 ($300-500) range.

Previous Xiaomi Mi Note 10 has an OLED panel from Visionox