The renowned research firm IDC has just published another of its quarterly researches. After analyzing the Indian market, the new report reveals the overall performance of China’s smartphone market. According to IDC, the Q3 2019 brought another decline in smartphone sales, however, it’s starting to show some signs of recovery. Year-over-year, the market has shrunk just 3.6%. This is a better result than the one achieved in the previous quarters.

According to the report, China’s smartphone market reached 98.9 million units during the last quarter. To the shock of no one, Huawei has kept the dominance. Interestingly enough, the Chinese Behemoth keeps gaining significant market share at the expense of its compatriots. Huawei has 42% of the Chinese cake with a 64.6% increase in shipments year-over-year. 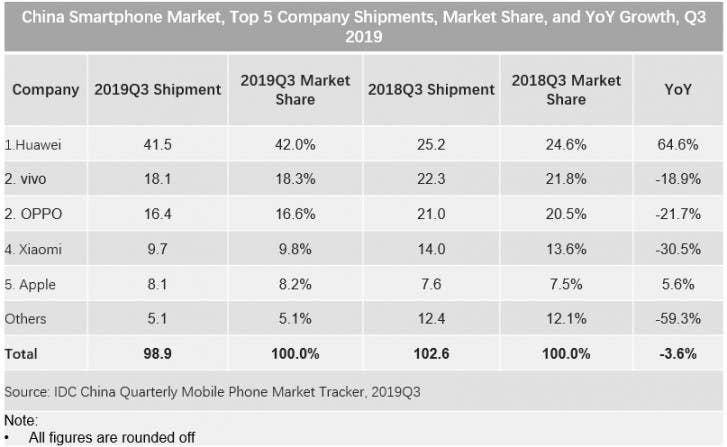 Vivo follows in a distant second with just 18.3% and is followed by sister brand Oppo with 16.6% and Xiaomi with 9.8%. Apple came in fifth posting a 5.6% growth in sales and taking 8.1% of the sales. This is pretty much due to the success of the recently released 2019 iPhones.

According to IDC, 5G will be a key element for smartphone market growth in the upcoming quarters. Worth noting that it will gain special traction once companies start to unveil the first mid-range devices with 5G connectivity. This is set to start early in 2020.