Apple’s high–end iPad Pro slates which are an embodiment of premium hardware could be getting a tough rival soon, as we have been inundated with rumors of a Huawei MatePad Pro in the past few weeks. Huawei’s CEO Richard Yu confirmed the reports a few days back when He took to Chinese social network Weibo to hint of the company’s intention to unveil a new Mate series products at an event in Shanghai, China on November 25. No direct mention of the Huawei MatePad Pro, but the official Weibo has today in a separate teaser released a teaser that confirms we’re dealing with the Huawei MatePad Pro.

Besides confirming the Huawei MatePad Pro moniker, the teaser also confirms the device will come with a supported Stylus or M-Pen just like Apple’s iPad Pro range and the Samsung Galaxy Tab S6. This lineup with previous reports/leaks that suggest the device will get a modern design that includes a stylus, and Keyboard support. The highlight is, however, its punch-hole camera design, making it the first-ever tablet to get such design. 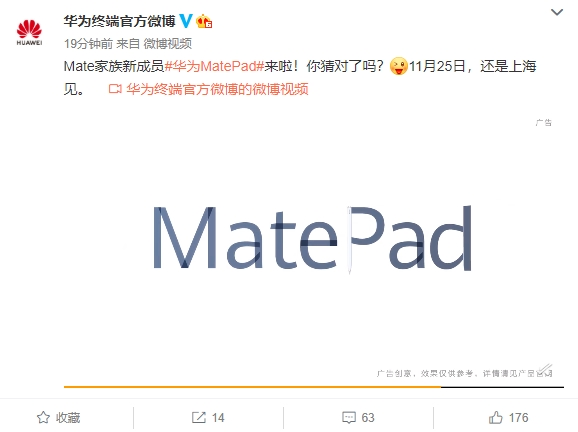 Huawei hasn’t revealed the official specs sheet at the moment. However, there are indications it could come with the firm’s top-end SoC – the Kirin 990. And that based on the premise it will meant compete with top guns like the Apple iPad Pro. It is also rumored to come with as much as  8GB of memory, and 256GB of flash memory. It could get a large 6000mAh battery cell. And speaking of the battery pack, a 3C listing earlier this month hints that the device could come with a 40W fast charge.