Google Play Protect is currently blocking a Xiaomi app that is pre-installed with Xiaomi phones. This app doesn’t cause any problems thus it is quite weird. When some users tried to access Quick Apps, the got the message “This app can collect data that could be used to track you.”. Note that this app is not available on Google’s Play Store. However, Google Play Protect still scans all pre-installed apps on any Play Services phone for malware. 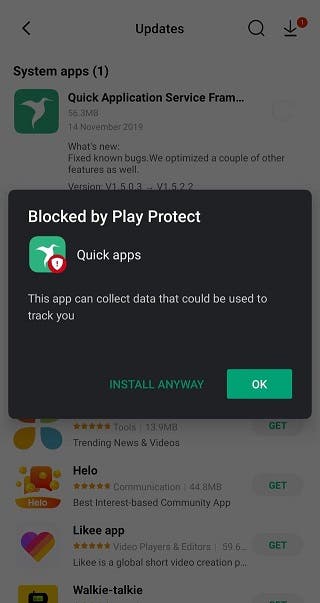 Google does not seem to like some requirements of Quick Apps, this includes the app’s 55 permissions. Among these permissions is that the app can get access to the camera and also install apps without confirmation. The app also has access to the phone IMEI numbers, SIM numbers, tower detail numbers, user credentials, and can record audio and video. It appears that Xiaomi uses this data to push targeted advertisements to its users that pop up on their lock screen, news widget, within browser ads, and more places around the system. Of course, a combination of permissions allows too much that users are probably unaware of. Google Play Protect is complaining about the fact that Quick Apps can collect diverse user data.

Anyway, if you do not use Quick Apps, you should probably just allow the blockage. We all need to protect our privacy. This current situation affects all Xiaomi phones including those from Redmi and Pocophone.

[UPDATE]  Xiaomi’s reply to GizChina on this issue

Regarding this issue, Xiaomi reached out to GizChina with the statement “We’re aware of the update concerning one of our system apps called Quick Apps. Some users may get a notification that this app has been blocked by Google Play Protect. We are in touch with Google regarding this and it is likely happening due to a revision in Google Play Protect’s algorithm. Rest assured that this system app is absolutely safe.”