Nokia brand focused website Nokiapoweruser just published some interesting info regarding the upcoming Nokia 2.3. The low-end device was indeed spotted on a Spanish store website with some its specs and price revealed.

According to the website, the Nokia 2.3 will be available in a variant with 2GB of RAM and 32GB of internal storage. Which would be a good – some would say necessary –  upgrade over the 16GB of storage available in previous models.

But that isn’t the only data we get from the leak. The store also revealed the official price of the device – €99.30, around $110. 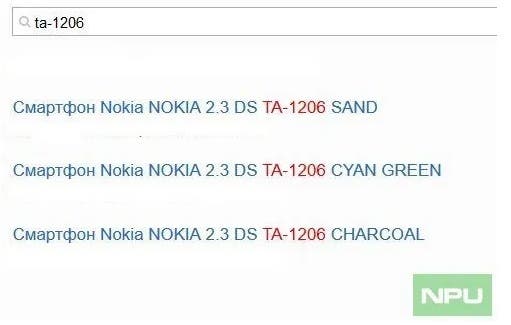 As we know from a previous leak, the Nokia 2.3 with model name “TA-1206” was spotted in a database in three color variants: “SAND”, “CYAN GREEN” and “CHARCOAL”. While in real world these colors may look more like brown, turquoise and black.

We aren’t aware of any of the specs on the handset, which could actually launch on December 5th along with the Nokia 8.2 mid-ranger. We do not expect any top hardware though as the “2” series is the most entry-level in Nokia’s lineup.

The latest Nokia 2.2 did indeed come with a low-end MediaTek Helio A22 processor, 5W MicroUSB charging and other specs you expect to find on a $110 device. On the plus side, the Nokia 2.2 was part of the Android One program, thus came with stock android and good software support. Will it be the same for the Nokia 2.3? We’ll probably find out in just over a week.

Previous Redmi K30 will bet on a round camera