The Motorola One Hyper has been constantly popping out in the headlines during the past weeks. After shipping smartphones with punch-hole displays, the One Hyper will be the company’s first device to boast a pop-up camera mechanism. Therefore, it will make it Motorola’s first truly bezel-less smartphone. We finally got a confirmation date for the Launch of this new handset. The Motorola One Hyper will be unveiled on December 3 in Brazil.

The company released a teaser for the event the clearly shows a pop-up camera mechanism. If we do a quick search on Motorola’s rumors, we know that there’s no device in the pipeline other than the One Hyper. According to several leaks, the pop-up cam will house a 32MP sensor. Interestingly enough, it is exactly half of the handset’s main rear sensor. Yeah, the Motorola One Hyper will also be Motorola’s first smartphone to boast a 64MP camera. 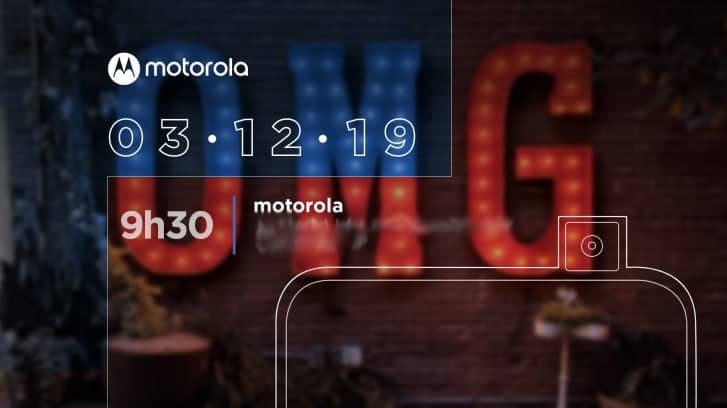 Despite the promising camera features, the remaining specifications aren’t so impressive. That if you’re expecting a flagship-level smartphone. Apparently, the Motorola One Hyper will ship with the midrange SoC Snapdragon 675 that comes along with 4GB of RAM and 128GB of Storage. Moreover, the pop-up camera system allows the company to equip the device with a 6.39-inch IPS LCD with an FHD+ resolution. Other specs include NFC, Bluetooth 5.0, Android 10 and a 3,600mAh battery.

Once again, Motorola takes Brazil as the unveiling stage of one of its smartphones. We are curious about the price adopted by the company with this smartphone. However, in Brazil smartphones are usually too overpriced. For that reason, we’ll have to wait for more news about International pricing and availability.