Xiaomi is gearing up to unveil the Redmi K30 series in the next month. The new set of smartphones is coming to overcome the popular Redmi K20/Mi 9T and the Redmi K20 Pro/Mi 9T Pro. However, according to recent leaks, we will not be seeing just two variants. Instead, Xiaomi is expected to deploy the Redmi K30 and K30 Pro and two 5G variants of these devices. While a lot of buzzes are surrounding the highly-anticipated Redmi K30 Pro, today we got a new live photo of the Redmi K30 along with a set of specifications for the 4G variant.

According to rumors, these devices will be unveiled on December 10 in China. During the past few days, we saw some live images of the device as well as certification listing confirming 27W fast charging and a 120Hz screen. The new live image that surfaced today, shows the smartphone in all its glory, without any kind of fancy case to hide the design. 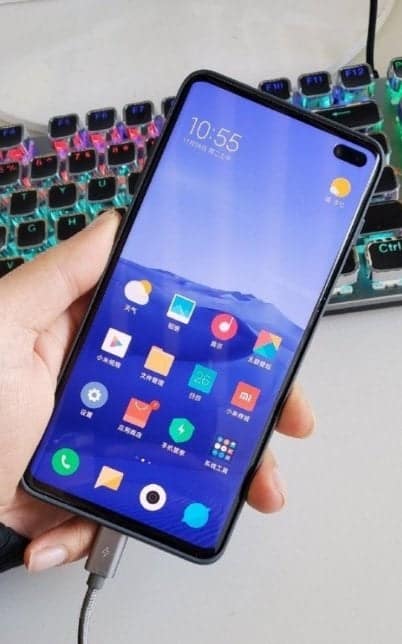 The above image shows the Redmi K30 glorious display. However, not everyone will be happy with the changes made in the new handset. Some users will consider the idea of using a punch-hole a downgrade over the pop-up camera mechanism on the Redmi K20 series. Like it or hate, it seems to be changing that is coming no matter what we think about it.

Besides the new image, we now have an alleged spec sheet for the Redmi K30 4G. Both of them are coming from Weibo and reveal a lot of details about the highly-anticipated device. According to the post, the handset will come with a 6.6-inch LCD with a 20:9 aspect ratio and a 20MP selfie cam with a 2MP depth helper in the oval punch hole located in the top right corner. If this report is accurate, then we will be seeing one of the first, if not the first smartphone to come with an LCD display that also supports under-display fingerprint scanner. We know that BOE has successfully developed a display with this characteristic, so perhaps the renowned display company will supply Redmi K30 panels. By the way, not everyone will be happy if Xiaomi really drops the AMOLED panels that are found in the K20 series. 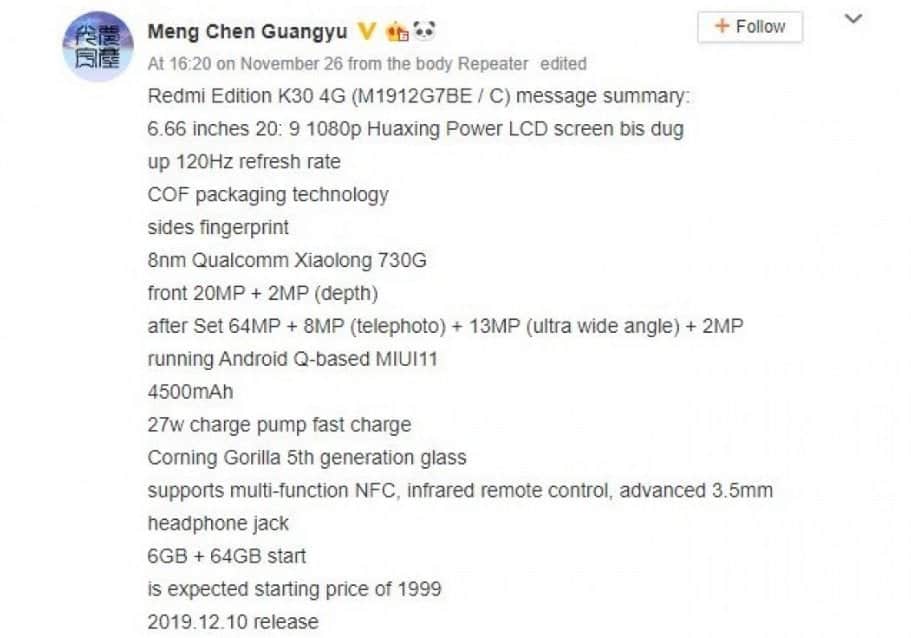 Moreover, the leak also reveals a quad-camera setup with a 64MP + 8MP telephoto + 13MP ultrawide + a 2MP depth sensors. Under the hood, we have the Snapdragon 730G along with 6GB RAM and 64 GB storage. Of course, this is just the basic version. The handset draws power from a generous 4,500mAh battery that charges via 27W fast-charging. These specifications match the recent Xiaomi smartphone that got 3C certification in China.

Other extras include NFC, IR Blaster and a headphone jack. The handset will run Android 10-based MIUI 11. Rumors indicate that it will have a starting price of CNY 1,999 ($284) launching on December 10.

Previous New problems for the Pixel 4, it has the same screen coating problem as other Pixels

Next Lenovo Teases its 5G Chipset Launch, Might Launch Devices Featuring the Same