According to recent reports, Samsung is gearing up to release a new Galaxy Note 10 Lite smartphone before the end of this year. This is a surprising move since the company has been keeping off the Lite variants during the past few years. Yesterday, the referred smartphone has received FCC approval and now there is a new GeekBench benchmark to further clarify some of the specifications.

The GeekBench benchmark reveals that the Galaxy Note 10 Lite has an SM-N770F model name. Moreover, it boasts an Exynos 9810 chipset alongside 6GB RAM. The smartphone achieved 667 in the Single-Core score and 2030 points in the Multi-Core tasks. Looking at the chipset, we can already see the first signs that this is a “Lite” variant. 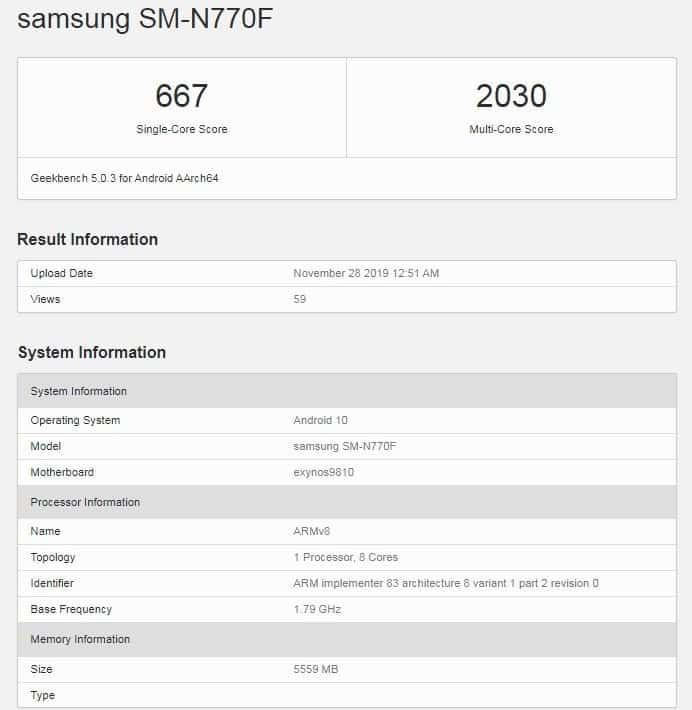 The Exynos 9810 is a one-year-old SoC which made his first appearance on the Galaxy Note 9. Despite this, it is still a solid and efficient chipset made on the 10nm process. Of course, it can be compared with Galaxy Note 10 performance, but it is some miles ahead of the mid-range segment.

The N letter is traditionally put in Galaxy Note model numbers. However, the following digits are a bit unusual in the Note series – they all have been SM-N9xxx. We already know that the last F on its model number stands for a Global Single-Sim variant. For that reason, we believe that the Galaxy Note 10 Lite is a device that will make a debut in oversea markets as well as in the South-Korea.

Next Honor 's President Zhao Ming: NSA-Only 5G Phones Will Be Obsolete by Next Year