It seems that the fifth camera of the Samsung Galaxy S11 Plus could be for to night shots. The hypothesis is put forward by the Dutch colleagues of letsgodigital, who discovered a trademark, registered at the European intellectual property office, which does not leave much room for imagination. The phone will have a bright night sensor.

The renderings we saw so far thanks to OnLeaks seem a bit strange because the various cameras are not arranged symmetrically in the large rear square module, but assuming they are correct, there is a plausible reason for this. The sensors have different sizes the one from the other. This allow us at this point to venture a hypothesis at least probable about how the sensors could be organized. It could be a main sensor, a telephoto, a wide-angle lens, one for 3D surveying and one for night-time photos.

Predictably, the registration of the mark does not offer any kind of technical anticipation on the sensor. From previous rumors we know instead that the main sensor should be the 108 MP, produced by Samsung itself, which we have already seen on the Xiaomi Mi Note 10. The other big news should be the arrival of the laser autofocus. A technology that has already existed for some time in the smartphone world. But Samsung has never adopted it. 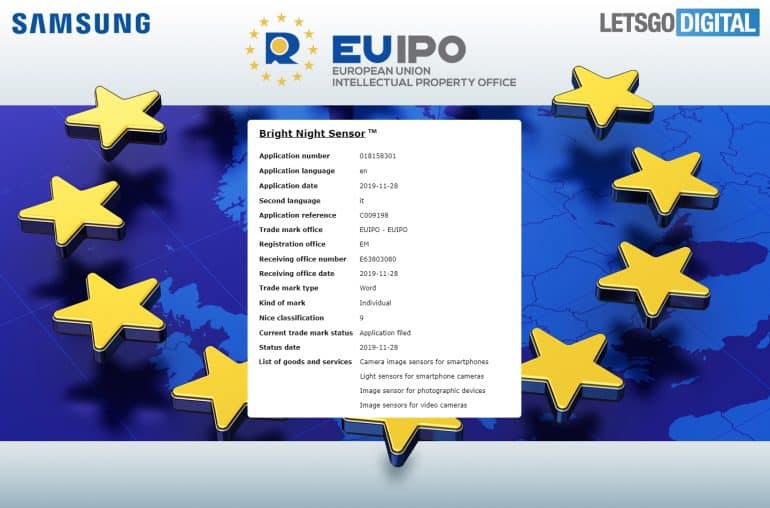 It is worth to mention that the Galaxy S11 with the model number SM-G968B has recently passed through the GeekBench certification. The smartphone runs on the Exynos 9830 chipset with a base frequency of 1.95Ghz. The Exynos 9830 is nothing but the company’s all-new Exynos 990 flagship SoC. The chipset comes with 5G connectivity and features eight cores. The smartphone has 12GB RAM.

Lastly, the listing reveals that the device will indeed run on the latest Android 10 operating system. Coming to the benchmark, the device managed to score 427 on single-core performance and 2326 in multi-core.