According to the results of the third quarter of this year, the global production of smartphones grew by 9.2%, and Samsung’s market share was 20.8%, experts at TrendForce research company calculated.

This figure was one of the best in the market and allowed the South Korean giant to maintain leadership in the mobile phone market. In quantitative terms, this is 78.1 million units and an increase on an annualized basis of 7.8%.

Compared to the second quarter of 2019, the share of Huawei has also increased to reach 67.5 million smartphones. The growth was 13.4% compared with the previous quarter and the Chinese tech giant controls 18% of the market share.

Apple came in third with 46.7 million smartphones and a market share of 12.4%. Analysts note an increase in iPhone production compared to the second quarter of this year by 42%. And this is the best indicator among all smartphone makers. 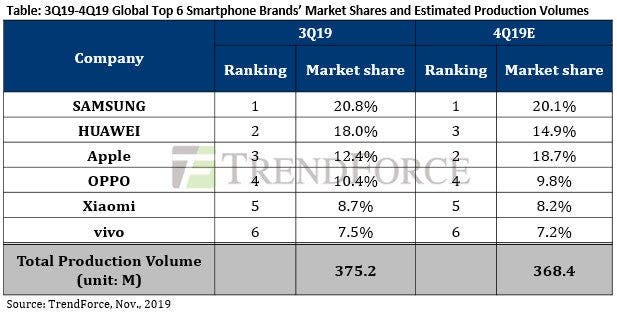 Apple will beat Huawei in the 4th quarter of this year

Analysts’ forecast for the 4th quarter of this year is also noteworthy, according to which Apple will bypass Huawei and will again be in second place, and iPhone production can reach 69 million units.