Redmi officially announced that the Redmi K30 5G version will use a built-in 4500mAh battery which supports 30W fast charge. It will also come with a standard 30W charger that supports QC / PD fast charge protocol. The official said that the “30W fast flash charging” technology of the Redmi K30 5G version uses a new charging architecture. It uses an independent charge pump and the charging conversion efficiency is up to 97%. According to the company, it takes only one hour to fully charge the Redmi K30 series. 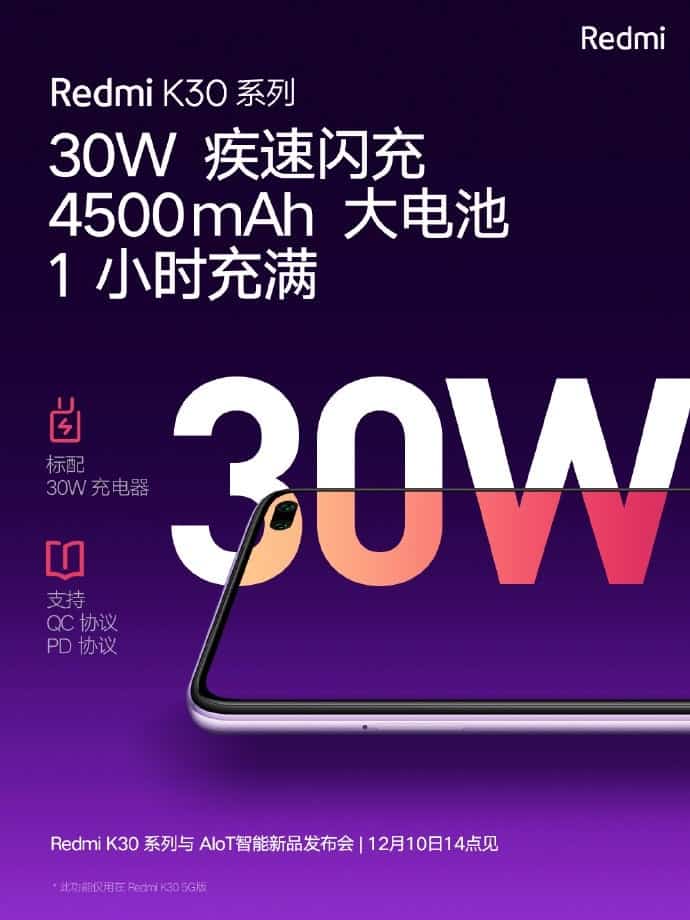 The Redmi K30 will use a Qualcomm Snapdragon 765G SoC which integrates a Snapdragon X52 5G modem. This would be the world’s first smartphone to use this chip. In the camera department, this handset will use a coin-like rear quad-camera. The camera sensors will have 64MP, 8MP, 5MP, and 2MP resolution. One of the sensors is the Sony IMX686 CMOS. This smartphone supports SA/NSA 5G dual-mode 5G network and has a downlink peak of 3.7Gbps. At the same time, it uses the fifth-generation Qualcomm AIE artificial intelligence engine. This engine has a Top 5 AI computing power. Other features on this smartphone include a side fingerprint sensor, dual punch-hole front camera, and 12 antenna design.

Recently, the company announced that the K30 series has passed the Hi-Res Audio “small gold standard” certification. According to the certification document, it has an excellent audio resolution and the sound information output is comparable to CD quality. Users can listen to songs and play games with immersive sound.

Read Also:  The Redmi K50i 5G Doesn't Cost A Bomb In India Thanks To These Offers

Finally, these mobile phones will be officially released on December 10, along with products such as Redmi Xiaoai Speaker Play, Redmi router AC2100 and RedmiBook full-screen notebook. While the Redmi K30 4G will be available for sale after launch, the 5G version will have to wait till January next year.