With which manufacturing process will Intel CPUs be built in 2029? 1.4 nanometers, according to a slide shown by ASML, a a Dutch company and currently the largest supplier in the world of photolithography systems for the semiconductor industry, during the IEEE International Electron Devices Meeting (IEDM) conference.

ASML presented for the occasion an altered version of an official Intel slide, replacing the dates indicated by the company in the lower part with specific production processes. For this reason you see both slides in the article.

According to reports by some US media (eg Anandtech), what is indicated in the modified slide remains relevant and therefore representative of the future intentions of the house of Santa Clara. As you can see, and as already indicated by Intel in the past, the goal is to advance the production process every 2 years, starting from the 10 nanometers that the company actually adopted this year with the Ice Lake mobile CPUs. 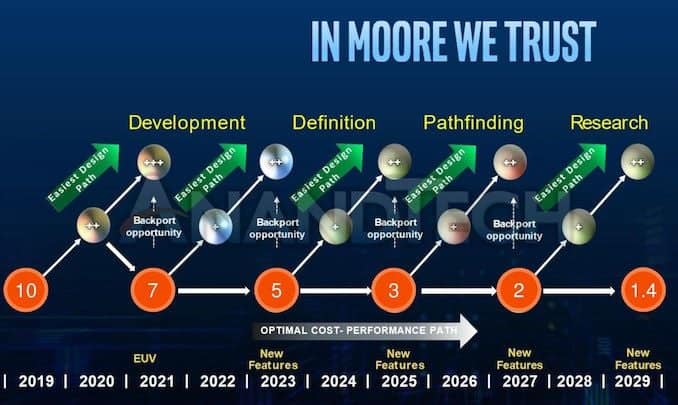 On the other hand, the slide clearly says “In Moore we trust”. That is Intel wants to continue to respect the so-called law of Moore. The number of transistors doubles every 18/24 months. With various other declinations and / or distortions.

As Anandtech points out, as far as extreme miniaturization is concerned. The industry has for some time been discussing even smaller dimensions. For example at the IEDM, there has been talk about 0.3 nanometers with self-assembling 2D materials. And obviously there are many obstacles on the path of Intel and its partners.

To address market demands and create a useful lifeboat in case of any problems in the progress of the production process – think about what is happening with the 14 nanometers – Intel will create two improved versions of each process.