Microsoft Windows 7 system which was released in 2009 will come to an end on January 14, 2020. Microsoft certainly does not want users to continue using the system, so they will urge users to upgrade to the new system with a full-screen warning. 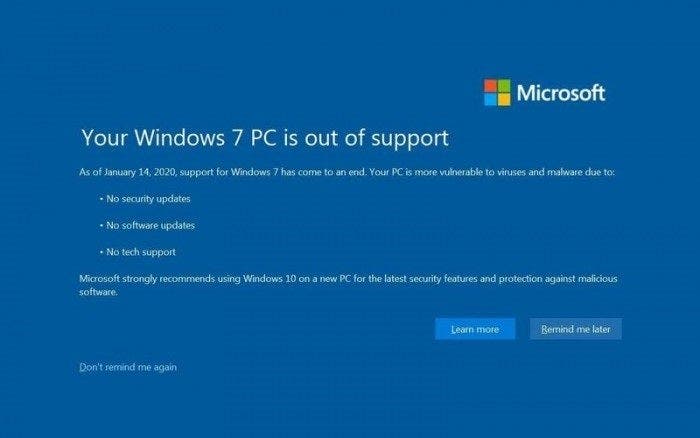 A Microsoft post today introduced this full-screen warning. As shown in the figure, Microsoft wrote in this warning:

“Your current Windows 7 PC is out of support. As of January 14, 2020, support for Windows 7 systems has come to an end. Your PC is vulnerable to viruses and malware due to

In the full-screen upgrade notification, there is an option of “Don’t remind me again” in the lower-left corner. In addition, there is also an option of “Remind me later”. Microsoft plans to run a full-screen warning every day at 12 noon after the user logs in to the desktop. If the user clicks the “Don’t remind again” button, the upgrade notification will stop.

Previous Apple iPhone 5G Sales May Be Disappointing Next Year