At the Huawei Developer Day, the company officially announced that its global monthly active users are over 570 million. In addition, it has over 1.2 million registered developers worldwide. The Huawei Developer Day (HDD) Dalian Station opened this afternoon, bringing the latest topics. HDD Dalian station mainly focuses on terminal security, HUAWEI DevEco Studio development guidance, AR / VR Engine, and other intense issues.  In addition, there are also discussions on new features such as fast service and AppGallery Connect. 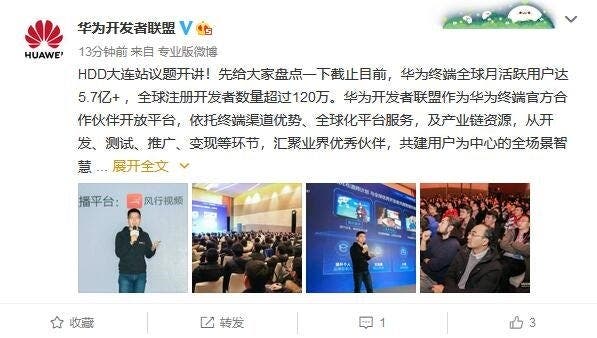 In a recent interview with CNN, Huawei’s CEO, Ren Zengfei said that the company has an ambitious “Plan B” to US technology. According to him, in order to ensure survival, Huawei also needs to prepare for the worst-case scenario. Ren Zhengfei emphasized that “if the US does not allow its technology companies to provide us with products, we have other options,” he added, “if these options become mature and stable, I don’t think we are likely to cooperate with US companies anymore.”

A report from UBS and Fomalhaut Techno Solutions shows that Huawei’s latest flagship smartphone, the Mate 30 series, does not include US parts. In addition, its state-of-the-art 5G base station also excludes US parts. When asked what would happen if Google did not get a license to cooperate with Huawei, Ren Zhengfei replied, “We have a very ambitious Plan B”. According to him, Huawei can become the world’s largest intelligence phone seller. However, this will take some time to achieve.

As of now, the US and Huawei are still at loggerheads. Although it appears that a compromise is in sight, there is more than we know. We will have to keep our fingers crossed as events unfold.