According to media reports, since the recovery of the financial crisis at the end of 2019, the performance of technology stocks should be in its best year. At the end of December, the 70-member “S & P 500 Information Technology (IT) Index” rose 48% in 2019, the best year for the index since it jumped 60% in 2009. What was different ten years ago was that the technology index was falling from 2008, when it plummeted 44%, creating buying opportunities and paving the way for the so-called “dead cat bounce”. In this new rebound, the iPhone maker, Apple, played a major role.

And this time, technology stocks fell by only 1.6% in 2018 and rebounded to new highs in 2019, indicating that the latest gains have been supported by the strengthening of the financial performance of the S & P 500 IT index companies and optimism for the wider economy.

This year, a group of semiconductor manufacturers and chip equipment companies led the index, as well as Apple. It should be noted that this index does not include Internet companies. As a result, FANG (Facebook, Amazon, Netflix, and Google) stocks are not included in the index. Even so, of the four major stocks mentioned above, only Facebook outperformed the S & P 500 IT Index, while every other stock underperformed by at least 18 percentage points. 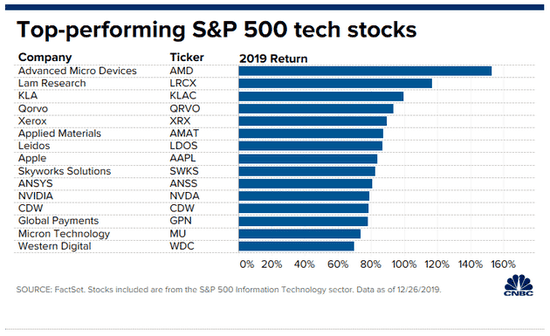 Jack Dollarhide, CEO of Longbow Asset Management, an asset management company, said: “This year’s FANG transaction is not ideal, and other technology companies are catching up. A large part of this is because consumers are mobile. The thirst for technology is growing stronger. “

Apple is the “main” reason for the surge

In addition, Apple’s performance is also very strong, ranking eighth in the S & P 500 IT index, up 84%. Given its sheer size, the iPhone maker is by far the biggest contributor to the index’s rise.

The smartphone market is becoming saturated and people have been worried that the iPhone cannot be better or more powerful. However, Apple continues to attract consumers with new features and options. According to reports, Apple will launch more iPhone models next year, some with larger screen sizes. Furthermore, CEO Tim Cook is optimistic about the performance of this year’s Christmas shopping season.

In addition to supporting the iPhone with advanced camera technology, longer battery life, and upgraded speakers, Apple has also created another fast-growing business: thanks to the popularity of Apple Watch and AirPods, the wearables division sales in the most recent quarter increased by 50% compared to the same period last year.

Without a doubt, all this is good for Apple suppliers such as Qorvo and AMD. Qorvo depends on Apple for about a third of its revenue. In addition, chipmaker AMD provides graphics processors for some Apple iMacs and MacBook Pros. In addition, Skyworks’ share price has risen 82% this year, ranking ninth in the S & P 500 IT index, and half of its revenue comes from selling mobile chips to Apple and its various foundry manufacturers.

Micron Technology, which provides Apple’s memory technology, ranked 14th in the index, up 74%.

“This is an apple world, and we are lucky to live in it,” Dollarhide said.

Next Samsung will unveil new "Artificial Human" Neon at CES 2020