Vivo launched the S1 Pro in China earlier this year with a pop-up camera for selfies and video calls. Later, a different phone with the same branding was unveiled in the Philippines last month. Now, the same handset is set to land on Indian shores as per a discovered teaser landing page on Amazon India and leaks from a few days back. The company also has a dedicated page ready on its own official website detailing all the key features of the handset.

The S1 Pro is powered by Qualcomm Snapdragon 665 paired with 8GB RAM and 128 ROM with support for microSD card to further expand the storage up to 256GB. It sports a 6.38-inches FHD+(1080 x 2340 pixels) AMOLED display at the front with a waterdrop notch to nest a 32MP selfie camera. The display also accommodates an in-screen fingerprint sensor for authentication. 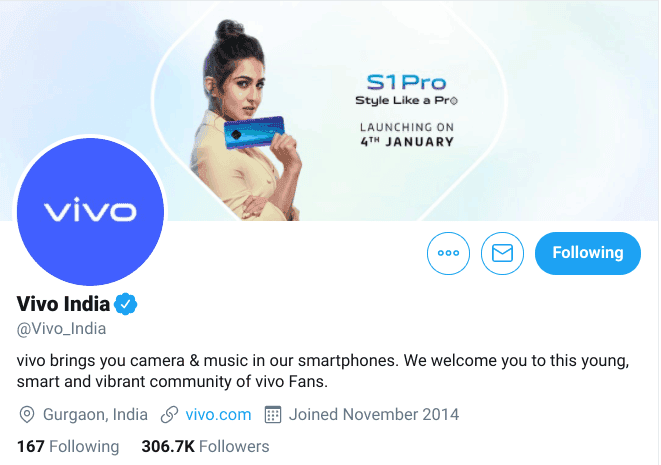 As for the back, the S1 Pro features a diamond-shaped centrally placed quad-camera setup which includes a 48MP primary sensor, an 8MP sensor with an ultra-wide lens, a 2MP macro shooter, and a 2MP depth sensor. Other features of the phone include a 3.5mm headphone jack, FuntounchOS based on Android Pie, and a 4,500mAh battery which will be able to charge at the rate of 18W via USB Type-C port.

The S1 Pro by Vivo is priced at PHP 15,999 in the Philippines. As for Indian pricing, it is expected to launch at ₹19,999 according to 91Mobiles. As mentioned on the company’s Twitter profile header, Vivo will launch the S1 Pro smartphone on January 4 in India.

Next Apple shares rose 84% this year, pushing US tech stocks to a 10-year high