We’ve been hearing a lot about the upcoming Realme X50 5G during the past few weeks. The upcoming device will be unveiled on January 7 as Realme’s first smartphone support the new 5G connectivity standard. It will feature the recently released Snapdragon 765G. Moreover, it comes with a 6.67-inch LCD display with a 120Hz refresh rate and a dual punch hole selfie camera. According to the teasers, it sports a two-day battery that charges to 70% in just 30 minutes. Last but not least, it will ship with Samsung’s 64MP GW1 sensor paired with an 8MP ultrawide, a 13MP 5x hybrid zoom and a 2MP super macro camera modules.  Now, Realme fans will be excited to know that there’s another smartphone coming on January 7. It’s the RMX2052 or Realme X50 Youth

As of now very little is known about this Youth variant, but according to a report, it’s very likely the Realme X50 Lite that we’ve heard about before.

As it turns out, there is a RMX2052 now. The first theory suggests Realme X50 to be RMX2051, while the other one suggests it to be RMX2001. In any case, the Realme X50 Youth is around the corner too.#Realme #RealmeX50 #RealmeX50Youth pic.twitter.com/nzXlO4R5g6

The aforementioned smartphone has been certified by the Chinese MIIT and it also comes with 5G support. It’s interesting to see that both variants with 5G connectivity, considering that Realme’s X50 major competitor, the Redmi K30 failed to deliver 5G in the most affordable variant. Of course, we believe that Realme will cut some corners in this Youth variant to justify a more affordable price tag. 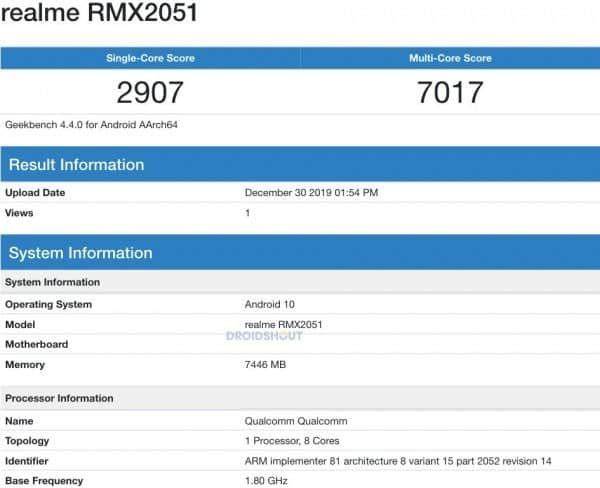 Meanwhile, the regular Realme X50 has paid a visit to the GeekBench realm. The Snapdragon 765G powered smartphones show a respectable score with 2,907 in the Single-Core tests and 7,017 in the Multi-Core. This blows away the Realme X2 and its Snapdragon 730G. It’s interesting to see that the device is running Android 10 which will have ColorOS 7 running atop.

We believe that more news about the Realme X50 will keep popping out ahead of the January 7 unveiling. So, if you’re interested in this device, stay tuned.

Next Samsung Galaxy S20, S20+ and S20 Ultra: this will be the names of the next Samsung flagship