The season of 2020 flagship is officially open. With many companies preparing their first flagships for this year, it’s natural to see Xiaomi joining the gang. With Samsung coming with its S20 series and Huawei getting ready for the P40 smartphones, Xiaomi won’t delay its new Mi 10 series. The company will release the Xiaomi Mi 10 and Mi 10 Pro flagship smartphones together. According to rumors, they’ll be at Mobile World Congress 2020 which happens in February. We already started to see rumors about the device’s specs. Today, we have an alleged photo of a tempered glass screen protector for the Mi 10.

The screen protector is enough to reveal that the phone’s display will come with expressive curves. With curved edges, it is another perfect creation for the “Waterfall” display gang. The Mi 10 seems to be another jewel in the “bezel-less” trend, only the chin sticks, but still much less than any previous Xiaomi phone. Another exciting characteristic, at least for those who aren’t fans of punch holes, there are no visible holes in the screen protector. Moreover, there’s no evidence of a notch or cutout coming. It makes you think that the Mi 10 or Mi 10 Pro will boast an under-display selfie camera. The first smartphones with this technology are coming this year, and of course, they’ll come from Chinese companies first. 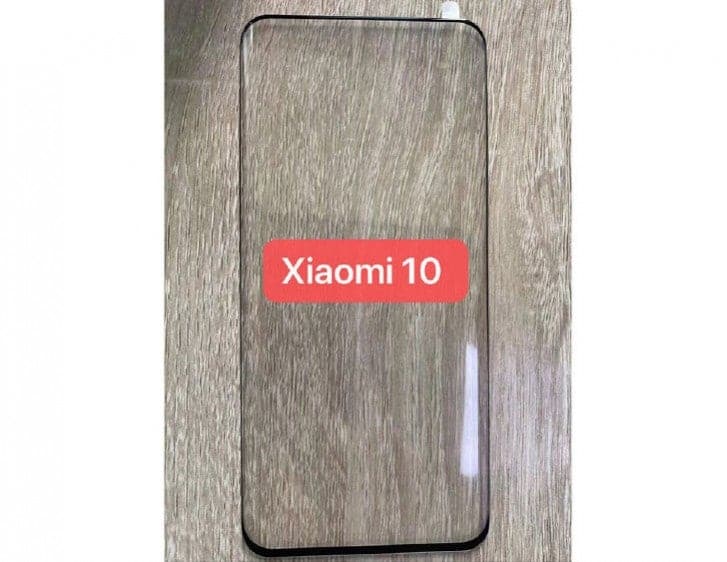 According to the leakster, there are holes to be seen in the Mi 10 / Mi 10 Pro

Despite what our eyes are seeing, the leakster who provided this image says that there are in fact holes to be found. So we wouldn’t be surprised to see a dual punch-hole design. It’ll be a little disappointing for those waiting for the new invisible camera technology. There’s even a possibility of another pop-up camera mechanism. We thought that Xiaomi would start to stick with this technology after the Redmi K20 / Mi 9T series. However, it moved to punch-holes and also some notches here and there.

Apart from the rumors and leaks, we believe that the Mi 10 and Mi 10 Pro are gearing to be the most ambitious smartphones of the Mi series.