Huami is rolling out a new update to its Amazfit GTR smartwatch. This update brings screen timeout feature for Alway-On display along with a couple more additions and bug fixes, as reported by Tizenhelp.

The Huami’s Amazfit series of smartwatches is popular because of its affordability and features for the asking price. In July of 2019, the company launched Amazfit GTR smartwatch in China. In the following months, it was made available in various international markets. Since then, the watch has received a number of updates, which has added more features to the wearable. In November, the watch received PAI function, a hear rate based health indicator and again in December, a new update was released which brought support for custom watch faces. Now, again in January, the watch is receiving a new update with firmware version 1.3.5.32. 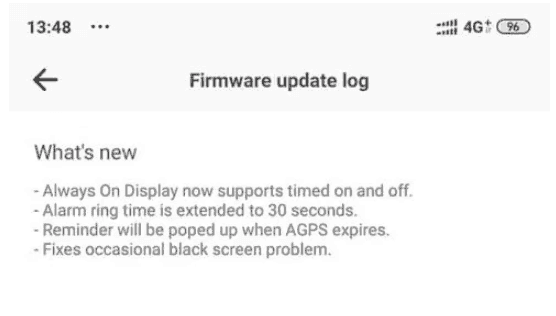 The newly released update for Amazfit GTR adds screen timeout feature for Always-On functionality. That means users can now set a specific time to let the watch sleep when Always-On display is turned on. Earlier, when this option was not available, the watch’s screen would be always turned on draining more battery. Further, this update extends the alarm ring time up to 30 seconds and will notify users on expiring of AGPS session. Moreover, it also fixes the occasional black screen problem faced by some users.

This new update is currently live in Malaysia and is expected to roll out in other regions soon.