According to Sammobile, Samsung officially confirmed that the Galaxy Tab S6 5G tablet will be officially released in the first quarter of this year. As early as last October, there were reports that Samsung will release a 5G version of the Galaxy Tab S6 flagship tablet. The product was found on Samsung’s own website last week, indicating that it will be released soon. Nevertheless, the most recent speculation claims that the 5G version of this device basically the same as the 4G version. 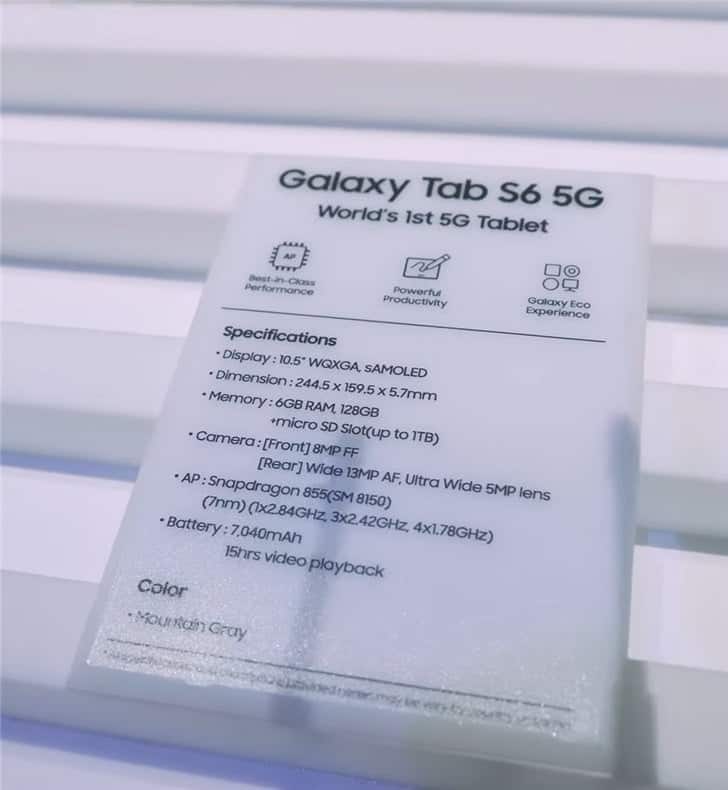 From the current exposure information, the Samsung Galaxy Tab S6 5G tablet uses a gray color scheme, and the product size is 244.5 x 159.5 x 5.7mm. This tablet comes with a 10.5-inch Super AMOLED panel but there is no news on the resolution.

In terms of hardware, it adopts a Qualcomm Snapdragon 855 processor coupled with 6GB of RAM and 128GB storage space (expandable to 1TB through Micro SD card). In terms of camera, it has an 8MP camera in front and a 13MP + 5MP dual rear cameras. The Samsung Galaxy Tab S6 5G has a battery capacity of 7040 mAh and can provide 15 hours of video playback.

The Galaxy Tab S6 5G tablet will first touch down in the South Korean market. This will be in Q1 2020 but there is no specific date and availability status for now. The development of 5G is in full throttle, however, we do not have many 5G tablets in the market.  In fact, there are not many options for 5G smartphones. The majority of the 5G phones are flagship products. However, we will most-likely see mid-range and perhaps entry-level 5G phones this year.