Forget the Galaxy Fold 2, the next Samsung foldable smartphone will be called Galaxy Bloom. DJ Koh, who is Samsung’s CEO, has revealed this during a private event held at CES in Las Vegas. Those present were able to see the smartphone live for the first time ever. They learned not only the main specifications but also the type of customers to whom it will be addressed.

Yes, because apparently Galaxy Bloom would be a device expressly designed for the female audience. The intent is to offer the female users a product that in shape, size and name is inspired by the popular cosmetic bag of the French Lancôme. When opened, Samsung says, it will have a 7.3-inch display, and when closed it will be decidedly small and easy to carry in your pocket.

The name “Bloom” had already emerged in recent months, but it was believed to be more attributable to the device code than its commercial name. Until now, there there is no official confirmation. What is reported that was said in an event behind closed doors can never be considered 100% reliable. Let’s say it could be called Bloom, or maybe we will soon return to talk about Galaxy Fold 2. 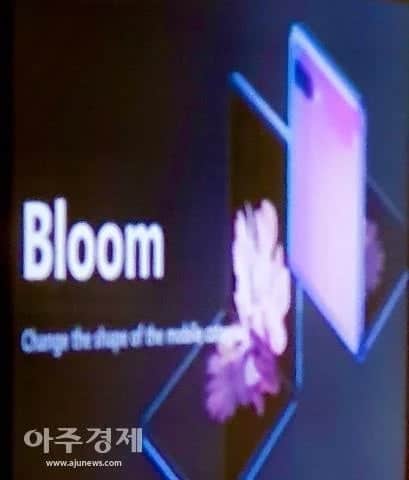 Beyond this, the form factor remains confirmed, shown in a photo stolen during the event in which you observe the smartphone that folds vertically, in the opposite way to what happens now with the Galaxy Fold.

And it did not end here. At the meeting held in Las Vegas, Samsung also confirmed the new Galaxy S20 denomination. Its the upcoming series expected for February 11th, until a few days ago known as Galaxy S11. The reason? There is talk of “new strategies”, probably to point out a clear jump compared to the previous generation. The fact is that we will have three models of the Galaxy S20 series. It includes the basic model, the Plus model and the Ultra. The latter is equipped with a 108MP camera, as already revealed in past rumors.

Another great novelty that emerged seems to be the debut of the 8K video recording. Apparently the S20 and the Galaxy Bloom range will be the first to offer this feature. And Samsung would already be working with Google to allow you to stream YouTube videos at this high quality.

Next Xiaomi announces MIUI 12 and its release date