Just a few days back, OnePlus showcased ‘Concept One’, the company’s first concept device at CES 2020. Although our memory is still fresh with the said device, OnePlus announced another event on Weibo, scheduled for 13th January in China. As per the teaser image, the company might reveal some new mysterious screen technology.

The teaser image posted by OnePlus official profile on Weibo says nothing except for the fact, the event will be held on January 13 in Shenzen China and it will involve some sort of screen tech. Also, there’ an outline of a display without any notch or punch hole. Maybe, the company may showcase OPPO-like in-screen camera technology. However, even though if it does, this tech will not be used in the upcoming OnePlus 8 series. Because 3D CAD render leaks from a couple of months back suggested the OnePlus 8 and the OnePlus 8 Pro to feature punch-hole displays. Additionally, the OnePlus 8 Lite design leak from last month, also revealed it to arrive with a punch-hole display but a prototype leak showcased the device with a notch similar to OnePlus 6. 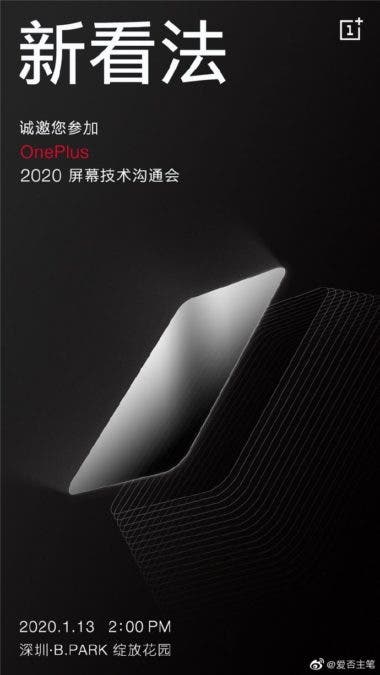 This means that OnePlus might either announce 120Hz refresh panel for its upcoming phones or something lesser-known like the electrochromic glass present in the OnePlus Concept One. Whatever, we will get our answer as the event unfolds at 2 PM (Beijing time) on 13th January.

Next Xiaomi Registered POCO F2 Trademark: Is Pocophone F2 On The Way?