The first-gen POCO F1 was based on the original Xiaomi Mi 8 series. There have been too many reasons why Xiaomi has decided to launch this phone and bring it to the overseas markets, especially to Europe. It’s been considered to be the cheapest Snapdragon 845 smartphone. Not in vain, the users are waiting for its continuation. And though the manufacturer has skipped the Snapdragon 855 SoC, it seems the Snapdragon 865 variant is on the way. Today, some bloggers reported that Xiaomi has applied for trademark registration for ‘POCO F2’. This simply means that Xiaomi may launch the Pocophone F2 smartphone in the nearest future. 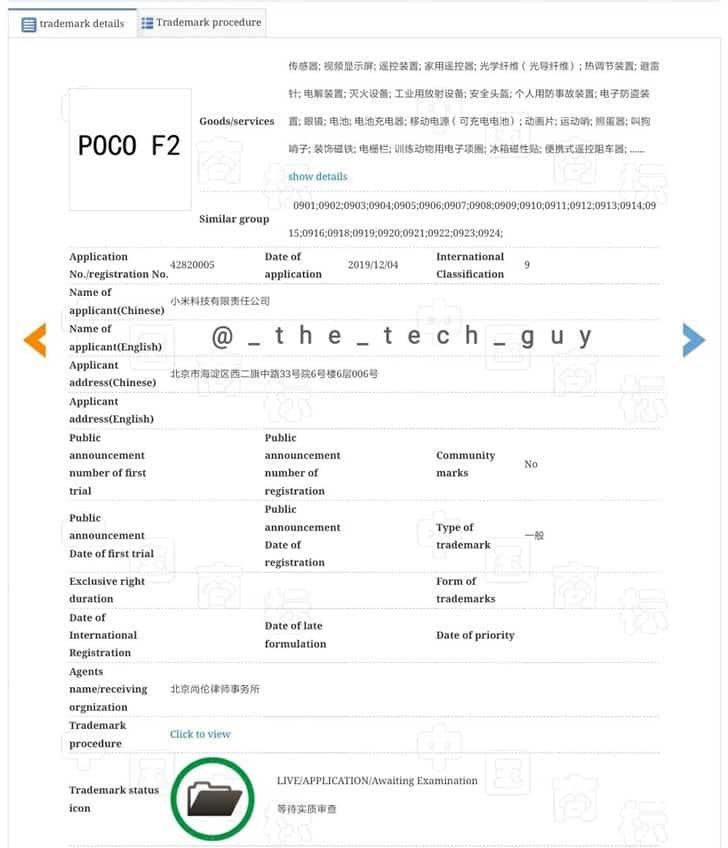 However, this is not for sure. Some Chinese popular bloggers are quite skeptical about the existence of the Pocophone F2. Say, @AndroidSaint, said that at the moment there is only a trademark, which by itself does not prove anything. Even the source of this news, @Sudhanshu said that he did not know why, but he was a little skeptical about ‘POCO F2’. In other words, if previously a registered trademark may hint at the upcoming launch of such a product, this is not the case.

Should Xiaomi Bring The Pocophone F2 To The Market?

On the other hand, we have seen a few hints/leaks, indicating the forthcoming launch of the Xiaomi Pocophone F2. And though at present, the next generation of POCO brand smartphones is still unknown, earlier, Alvin Tse, the head of Xiaomi’s Pocophone Global, said that he would provide more information about POCO in 2020.

As for us, we think there is no serious reason to launch the second generation of the POCO handset. We mean Xiaomi has already separated its Redmi brand. And one of the reasons was making it easier to enter other markets. In this sense, Xiaomi shouldn’t run a triple-brand strategy at the moment, when the market is oversaturated.

Previous OnePlus to show off new screen tech on January 13

Next Samsung Galaxy S7 Edge Caught Fire During An Ordinary Use