Previously, we have heard too much about Samsung phones’ explosions that were caused due to battery problems. Seems this has been a common thing for Samsung smartphones. Joking. However, today, an old-but-good Samsung handset has recalled why we all love Samsung. A Samsung Galaxy S7 Edge user in India recently caught fire for no reason, even without charging the phone.

The woman, Seema Agarwal, reportedly said that she did not want to use any phones anymore due to the accidental fire.

Seema Agarwal, a 52-yead old woman, said that her Samsung Galaxy S7 Edge has never been repaired. She bought her phone on December 28, 2016. And after using it for a few years, in late December 2019, she found her phone suddenly became very hot. So for safety reasons, she planned to put the device on the porch before going out. And she never thought that her smartphone would catch fire immediately. Seema Agarwal stated that she has always insisted on using Samsung’s original charger and USB charging cable. 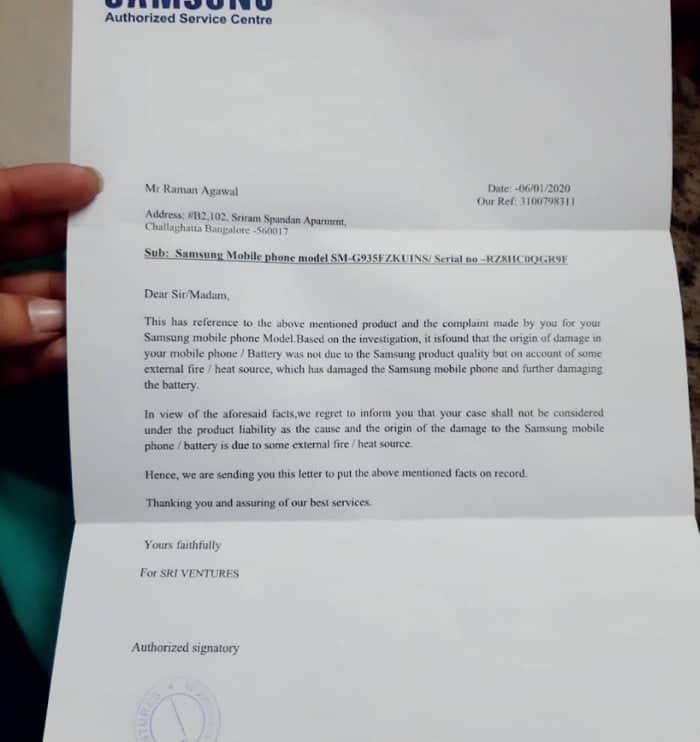 Anyways, once it happened, she immediately called the police and contacted Samsung. But Samsung representative said: ‘According to the final investigation, the cause of the phone/battery fire was that the external fire/heat source damaged the phone/battery. Seema Agarwal’s family completely doesn’t accept this statement and intends to sue Samsung.

It is worth noting that Samsung’s previous fire explosions were mainly concerning the Galaxy Note 7 series products rather than the Galaxy S7 series. And once the manufacturer understood there is a real problem related to the Note 7 batteries, it suspended sales of the whole line.