Recently, some Nokia smartphones got the Android 10 update. However, the company does not have a smartphone that comes with Google’s latest system out-of-the-box. According to a recent certification, the first Nokia phone to come with Android 10 out-of-the-box will use a Snapdragon 665 SoC. 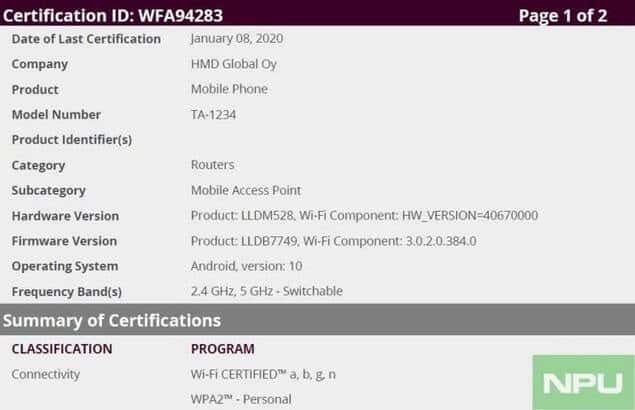 According to NPU, a Nokia phone model “TA-1234” recently passed Wi-Fi certification, Russian EEC and Indian BIS certification. From the certification information, “TA-1234” will be Nokia’s first smartphone with Android 10 out-of-the-box and it will have the Qualcomm Snapdragon 665 processor under the hood. With regard to the news of Nokia’s new machine, there are reports that Nokia 8.2 5G and another new device from the company will officially debut at MWC 2020. NPU speculates that “TA-1234” maybe a 4G version of the Nokia 8.2. However, there are no official details regarding this device for now.

In other reports, DxOMark has officially announced the Nokia 7.2 mobile phone’s main camera score. According to the result, this smartphone scores 85 points. This is the same as the score for Nokia 9 PureView, the world’s first phone with five rear cameras. The Nokia 7.2 uses a rear “Oreo” triple camera setup. It comes with a 48MP main camera as well as an 8MP ultra-wide-angle lens and a 5MP depth sensor. The 85 points for this smartphone is for the 48MP main camera, In the image rating, it scores 90 points however, for videos, it scores 75 points.

In terms of images, DxOMark said that the Nokia 7.2 basic performance is very good. It has the advantages of good exposure, wide dynamic range, and pleasing colors. Nevertheless, the autofocus is unstable and there is a lot of noise. In terms of video, the advantages are good anti-shake effect, target exposure is usually accurate and there is less noise in all cases. However, the autofocus is very slow, ghosting often occurs, and color vignetting occurs in outdoor videos. In addition, there is severe jitter in outdoor and indoor videos.

Next Gionee Steel 5 Launched in China with 5000mAh battery