Today, Jin Ge, the general manager of Lenovo’s mobile phone business in China, released some real images of the Motorola Razr which is now in mass production. As can be seen from the pictures, the Motorola RAZR foldable phone capacity is 6GB + 128GB. The actual usable capacity is 106GB, and the specific model is XT2000-2. It is worth noting that the production box of the RAZR foldable mobile phone has a unique triangular design. The transparent plastic cover at the top reflects the official logo of Motorola.

Motorola’s RAZR foldable phone uses a Quick View display that supports touch functions. In addition, users can carry out various operations without opening the phone. These include playing music, taking selfies, viewing notifications, and more. When the user flips to open the inner screen, the content seen in the Quick View display will move to the larger flexible screen. 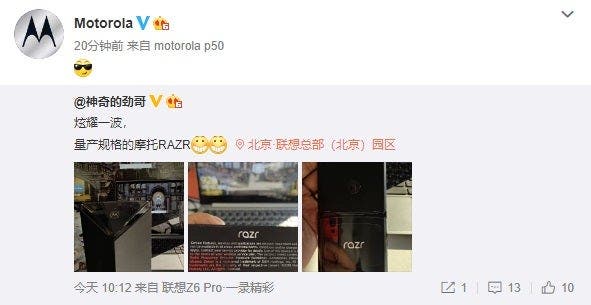 Motorola RAZR foldable phone comes with a Snapdragon 710 processor and runs on a pure Android system. The device is also waterproof, making it more durable. Motorola’s RAZR foldable phone sells for $ 1,499 in the US (Verizon Wireless). It is worth noting that the executive vice president of Lenovo Group and president of China, revealed in a media interview during CES 2020 that the folding screen phone Moto Razr may be released in the Chinese market at the end of the second quarter of this year.

Motorola Razr hit the US last year – not on sale yet

Recall that this smartphone hit the US in November 2019. However, due to market demand and supply issues, there is a delay in its sale in the US. As for the Chinese launch, Liu Jun said that Moto Razr will support 5G network. This means that there will be a couple of tweaks to the US version. Hardware-wise, the Motorola Razr packs a small 2.7 inches screen on the outside with a resolution of 800 × 600. On the inside, there is a 6.2-inch folding screen with a resolution of 2142 × 876. It’s worth mentioning that there’s also a quite large bezel under the display; which is also where we find the fingerprint scanner. This smartphone packs a 2510 mAh battery. However, there are expectations that the Chinese version with 5G will use a larger battery.

Upcoming Moto Razr 2 Will Be Announced on September 9!