Last month, LG launched its dual-screen smartphone dubbed LG G8X ThinQ in India. The smartphone maker is now working on its next flagship phone, to be called LG G9. It seems like the company is working on another smartphone and this time we might be looking at the LG K43 smartphone. Well, a new LG smartphone has now appeared on the GeekBench listing with the model number LGE LM-KM430IM. As the model suggests, the phone might come with the K43 moniker. We’re already aware that there is a K50 smartphone as well in the lineup. 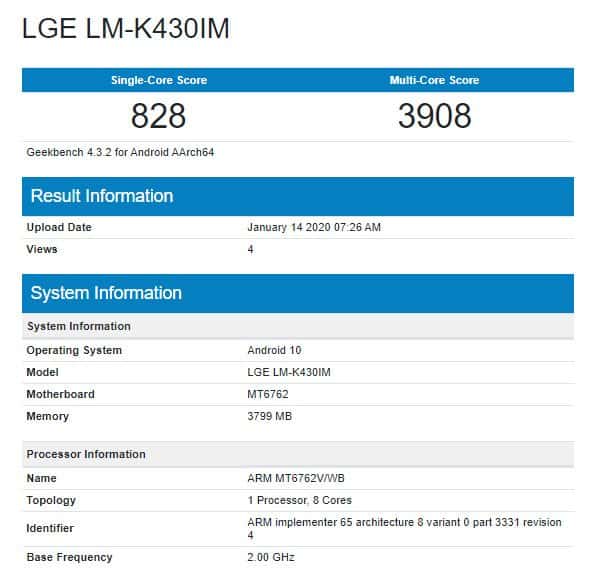 This indicates the K43 should shit between the previous-gen K40 and the upcoming K50 smartphone. As expected, the GeekBench listing has revealed some key information on the device. As per the listing, it will run on the latest Android 10 OS out-of-the-box. Furthermore, it will make use of the MediaTek MT6762 chipset which is nothing but the Helio P22. We have already seen the same chipset in the K40, K50 and K50S smartphones. The SoC is coupled with the 4GB of RAM.

Coming to the benchmark scores, LG K43 managed to score 828 in the single-core performance and 3908 in the multi-core test. Apart from these, we don’t have much information on the device as of now. In fact, we don’t even know the physical appearance of it. With that said, we’re expecting more leaks and rumors to come forward in the coming weeks. Coming to the launch date, the smartphone maker might announce the phone at or before MWC 2020.