Vivo will be showcasing its third APEX concept smartphone ahead of MWC 2020 on 23rd February in Barcelona. The APEX line of devices is a concept series which Vivo uses to flaunt its latest in cutting-edge mobile innovation. Out of the previous two APEX devices, only the first one with pop-up and in-screen fingerprint sensor was made available to the public as the Vivo NEX, whereas the second one without any port and a larger area for under-display fingerprint scanner has yet to make it to common people. It is still not sure what Vivo has in stores for the nex Apex as the teaser poster for press invite does not reveal much. 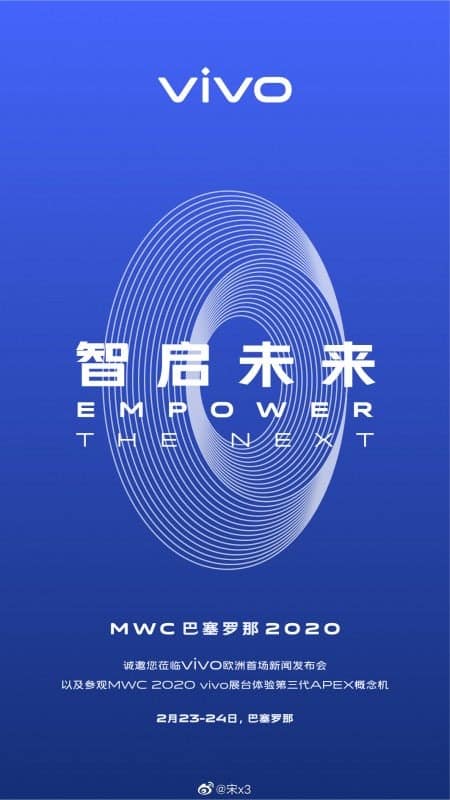 Vivo has been showing off its innovative hardware under the APEX brand for its concept smartphones, which they have been doing so at the MWC since 2018. The 2020 edition of MWC is now just around the corner and the company has sent press invites with a tagline – ‘Empower the Next’,  for its third Apex smartphone. It is not clear what the company will announce new this year, perhaps, we might see an in-screen selfie camera or some hybrid zoom system. Whatever it is, it will be unwrapped on 23rd February, a day ahead of MWC 2020.

Next Microsoft Xbox Series X will use Groupe-controlled PCIe 4.0 SSD

GSMA announces a refund for the cancellation of MWC 2020