Samsung will be officially unveiling the Galaxy S20 series and Galaxy Z Flip foldable at Samsung Galaxy Unpacked Event on 11th February. Long before their release, we’ve already seen pretty detailed renders and even live images leaked multiple times shedding new information about the upcoming series. We’ve also seen details about the hardware trickle down bit by bit up till this point. But now, the entire spec sheet of Galaxy S20 series is out courtesy of Ishan Agarwal via MySmartPrice, giving us a pretty clear picture of the series.

According to the new leak, there will be three Galaxy S20 devices including standard Galaxy S20 5G, Galaxy S20 Plus 5G, and Galaxy S20 Ultra 5G. As the name suggests, all three of them will be 5G enabled and the Ultra variant will be the highest-end offering from the company. The trio will be powered by the company’s in-house Exynos 990 7nm chipset for regions like Europe and Indian as usual and not Qualcomm Snapdragon 865 as reported earlier. They will be only available in 128GB storage configuration with support for microSD card except for the S20 Ultra, which will also come in 512GB variant.

Other common features among them will include 120Hz Infinity-O Dynamic AMOLED display, Dolby Atmos speakers tuned by AKG, IP68 certification for dust and water resistance, and One UI 2.0 based on Android 10. As far as display sizes are concerned, the standard model will sport a 6.2-inches panel, the Plus model will come with a 6.7-inches display, and the Ultra model will come fitted with a 6.9-inches screen. Interestingly, all of them will have the same resolution of WQHD+ (1440 x 3200 pixels) and 20:9 aspect ratio. However, the pixels per pinch will differ among them – 563ppi, 525ppi, and 511ppi respectively, due to different screen sizes. 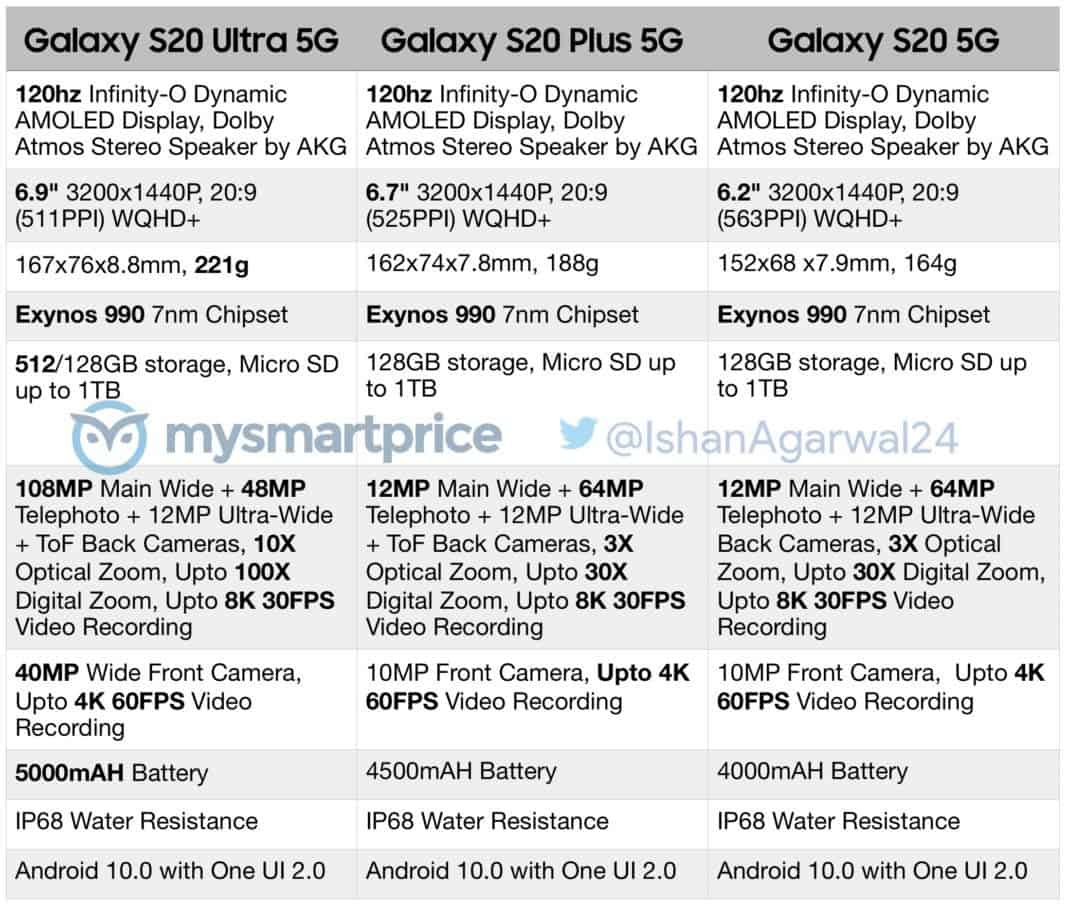 Next Xiaomi Mi 10: a new poster reveals its design and release date