Back in September 2019, Google launched its latest version of the Android operating system i.e. Android 10. It’s not even been more than four months and we have started hearing about the next Android version. Recently, Google Pixel 4 surfaced on the GeekBench listing running the yet-to-be-released Android R operating system. As per the listing, the device scored 712 in single-core performance and 2181 in the multicore test. Furthermore, the surfaced device features 6GB RAM. All these information checks out for the Pixel 4 smartphone. 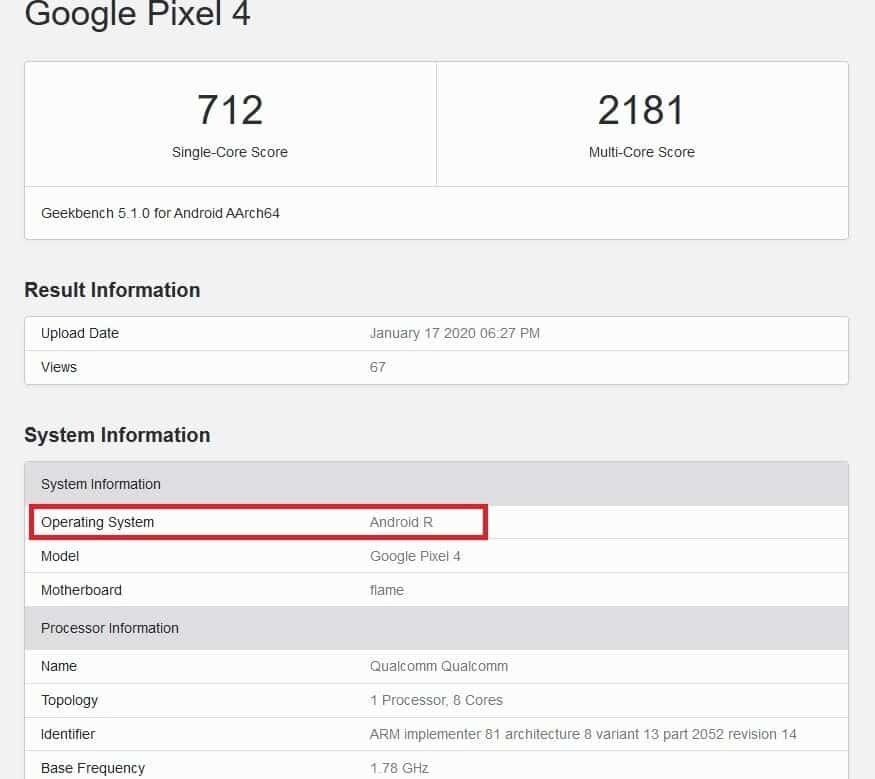 We are already aware of the fact that Google scrapped the dessert naming schemes with the Android 10 launch. If that’s the case, then how come the listing talks about Android R instead of the numerical Android 11. Well, it seems like the search engine giant is still using the alphabetical naming scheme for the developer preview. For those who’re unaware, Google generally releases four to six beta versions of Android before making it publically available. Well, the spotted Google Pixel 4 is rocking the Android R (Android 11) developer review.

Sadly, we don’t have much information on the next iteration of the Android operating system as of now. Considering the previous leaks, Google will remove the 4GB size limit for the video recording files with Android R. Furthermore, the release might come with a smarter Airplane Mode that will refrain from disabling Bluetooth and other similar content while on Flight mode. We might see the company officially announcing the Android R developer preview program in the coming weeks. This is because the software will see numerous beta releases before going official later this year.  As expected, Pixel devices are going to be the first ones to receive the beta updates and more devices will soon follow the suit. We’re expecting more details on Android R or Android 11 to come forward in the coming days.