Back in 2018, Huawei launched its premium flagship laptop MateBook 13. It came with features such as 2K touch display, 8th generation Intel CPUs and Nvidia GeForce MX150 GPU. Well, it seems like the smartphone maker is now planning to launch an upgraded variant of the laptop to be called MateBook 13 2020 Edition. The laptop has now leaked for the very first time revealing some key specifications along the way. 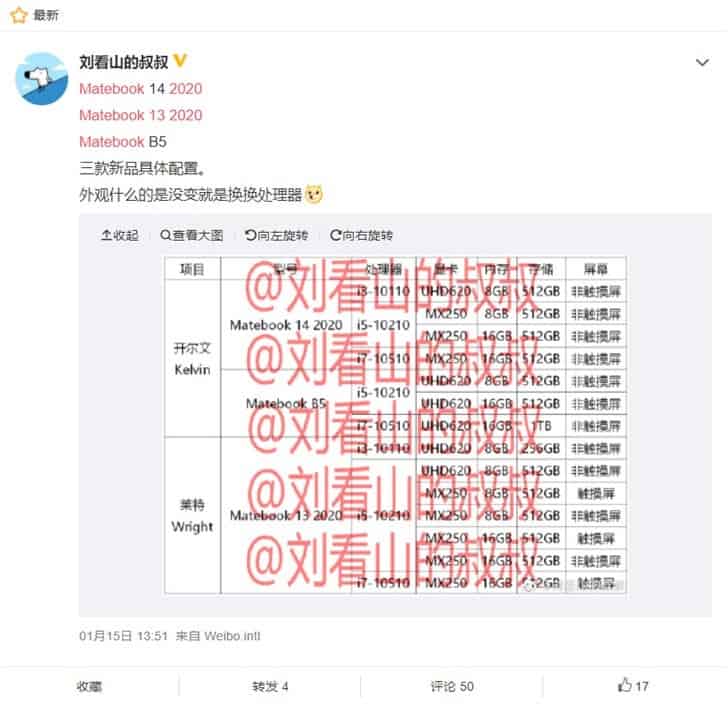 This leak is coming from a famous Chinese digital blogger. As per the leak, Huawei is planning to launch three laptops – MateBook 13, MateBook 14 and MateBook B5 – this year. All three models will feature Intel’s latest 10th generation of CPUs (Comet Lake). The MateBook 14 2020 will come in three different variants having up to 16GB RAM, up to Nvidia GeForce MX250 GPU and up to 512GB SSD storage.

The MateBook B5, on the other hand, will only come in two variants featuring up to 16GB RAM, Intel UHD620 GPU and up to 512GB SSD. Coming to the MateBook 13 2020, you will see three different variants based on the chipset and MX250 GPU, up to 16GB RAM and up to 512GB SSD storage. You can also check the above image to know more about the variants. Just like the 2018 model, we will see a 2K display with touch screen support in the MateBook 13 2020.

Sadly, the current leak has not revealed any information on the availability or pricing of these models. Although we should see the narrow bezels, premium body and top-end hardware just like the previous generations of MateBook lineup. We should see more information to hit the rumor mill in the coming weeks.

Next FBI Agents Stand Up To Apple, Saying It's Provided Enough Help For Unlocking The iPhones