As the successor to the global model, Galaxy A50, the Samsung Galaxy A51 still has the arduous task of landing in the global market. The latest Wi-Fi Alliance certification indicates that the Galaxy A51 will be available in the US market. The certification indicates that the device model number is SM-A515U. The “U” at the end indicates a US device locked by the operator. Further firmware leaks indicate that the phone will be available via AT & T, T-Mobile, Verizon, and Sprint. These are the four major carriers in the US. There are also rumors that the Samsung Galaxy A51 will have a 5G version. However, this version will first debut in South Korea before it rolls out to regions. 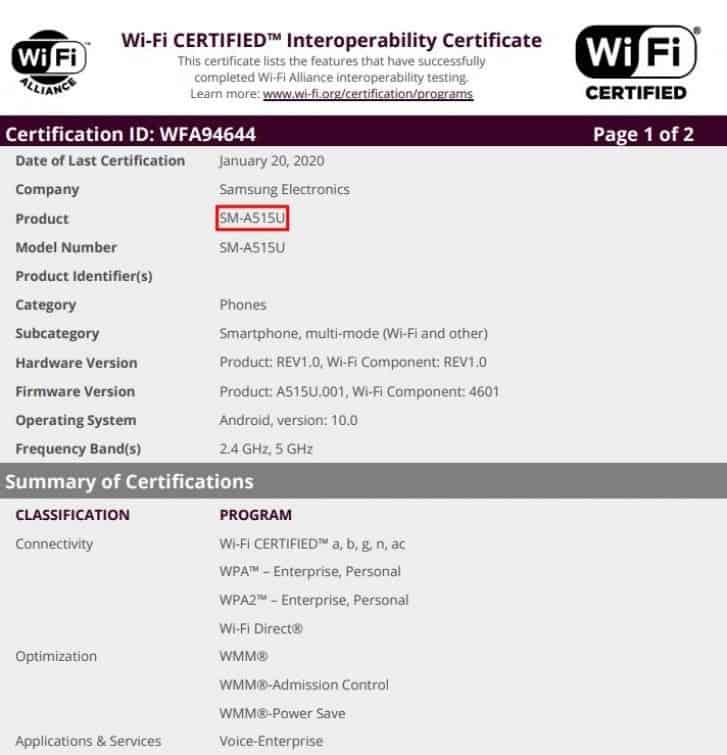 The Samsung Galaxy A51 comes with an Exynos 9611 SoC coupled with 8GB of RAM and 128GB of internal storage which is expandable up to 512GB via a microSD card. It runs One UI 2.0 based on Android 10. The Samsung Galaxy A51 has a 6.5-inch 20:9 Infinity-O Super AMOLED center punch-hole display with an on-screen fingerprint sensor. The front camera is a 32MP sensor. On the rear, there is an L-type quad-camera setup. The configuration is 48MP main camera + 12MP super wide-angle (123 degrees) as well as two 5MP cameras. The battery capacity is 4000 mAh and it supports 15W fast charging. This phone is currently on sale in the European market, with prices starting at 340 euros (about $377).