Samsung appears to be on fire with their mid-range segment in these past days. After seeing the Galaxy A51 getting certified yesterday, today was indeed the turn of the Samsung Galaxy M31.

The Samsung Galaxy M31 Was Just Certified by Wi-Fi Alliance; Is It Launching in February? 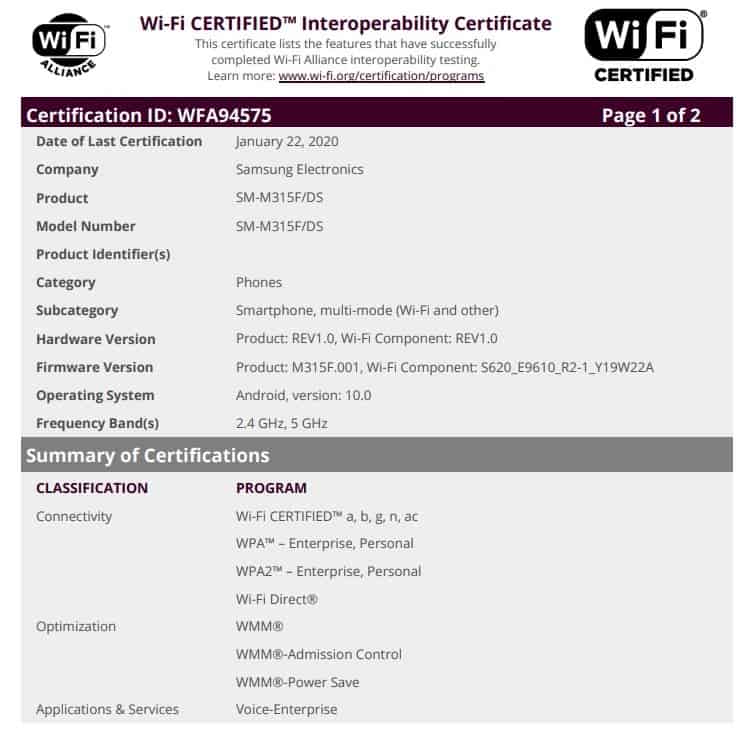 The smartphone has, in fact, received its Wi-Fi certification by the WiFi Alliance, just like with the Galaxy A51. The handset comes with the model number: SM-M315F/DS: with “DS” standing for Dual SIM.

In addition, the website also reveals that the Galaxy M31 will be equipped with the Android 10.0 operating system and it will support Dual-Band WiFi at 2.4GHz and 5GHz.

Other possible specifications on the Samsung Galaxy M31 should include a 48MP main sensor; probably from Samsung’ own portfolio. The camera would be paired with three more shooters; an ultra wide, a macro lens and a sensor to capture depth of field data.

As far as the rest of the hardware is concerned, the smartphone should be fueled by a Qualcomm Snapdragon 665 or a Samsung Exynos 9611 processor; along with 6GB of RAM, 64GB of internal storage and a very captivating red color scheme. So, from what we know this far, the Galaxy M31 is expected to be a low to mid-end phone with a price ranging at the $200 mark.

Finally, the smartphone should be released next month, February 2020. Additionally, with the Samsung Galaxy S20 series launch already planned for February 11th, the company might delay it to the end of the month.

Are you guys looking forward to Samsung releasing the Galaxy M31? Let us know in the comments section down below!

Previous Huawei founder says the company will survive without the U.S.