According to a new report from the research company Canalys, the segment of Bluetooth Headphones will hit its peak in the upcoming months. In fact, they’ll be the fastest-growing category of smart devices over the next few years. Despite this, smartphones will keep their position as the leading smart device. 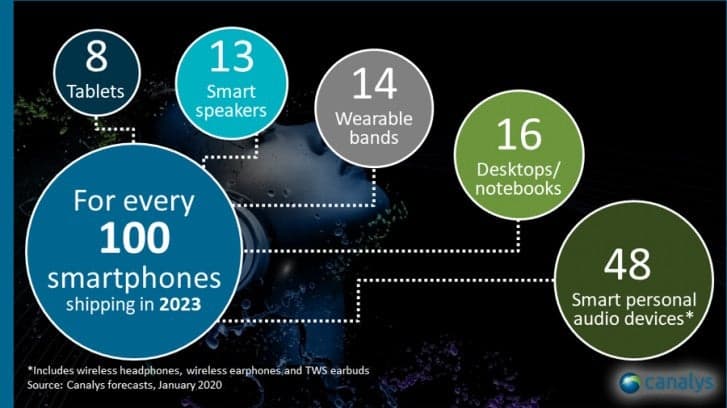 The analysts state that 3 billion smart devices will be shipped globally in 2023, up from 2.4 billion in 2019. Half of those smart devices will be smartphones – 1.5 billion. It will represent a small but consistent growth. Meanwhile, PCs, laptops and tables will keep its decline. Following smartphones, we’ll have smart personal audio products. This includes everyhing from true wireless headsets (TWS) to over ear headphones. The report indicates that we can call these devices “the next big thing” in the industry, after all, 726 million units are predicted to ship in 2023.

Canalys expects personal audio shipments to reach 490 million units this year. It will mark a growth of 32.1% compared to 2019. 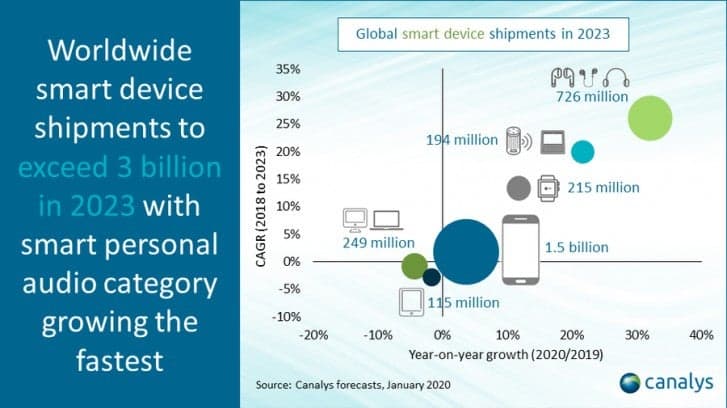 Apparently, Apple’s AirPod will be the company’s next iPod. According to the research AirPod and Watch business will surpass Mac and iPad revenue by the end of this year. However, Apple will have to fend off other makers. The competition is trying the best to surpass Apple’s unified ecosystem with powerful devices that can offer a similar seamless experience.

We have to agree that after 2019, the audio products are becoming extremely popular. Especially the range of truly wireless earphones with many new brands joining in the bandwagon. Perhaps the continuous wave of smartphones without 3.5mm headphone jacks is one of the factors to explain why customers are switching fast to bluetooth headphones.

Next Motorola RAZR Pre-Orders Kick Off on January 26th