Our phones have become the main camera for many of us. In fact, it has evolved significantly from the past. Each time the quality of the photographs and videos is better, both for software, and for the hardware that manufacturers include. The hardware should this year make a great leap in quality. Despite this, there are some manufacturers who still prefer to rely on specialized brands in photography. This is to ensure the quality of their phone’s cameras. Xiaomi could do this on their future phones.

Since the Huawei P9, we have seen how the Chinese firm works side by side with Leica to improve the optics of its cameras. Also, Motorola collaborated with Hasselblad to launch a photo-oriented Moto Mod. Nokia works together with Zeiss also. And now, we see that Xiaomi could get to implement this type of collaborations in their next phones, as the firm has suggested.

Canon, Hasselblad, Nikon … Who will Xiaomi work with?

Everything has emerged as a result of a survey that Xiaomi has published on Weibo. In the survey, users were asked, with which brand they would like Xiaomi to collaborate. Among the options, we had Canon, Nikon, Hasselblad and the “No need” option. The point is that this survey has had a great impact and after more than 4,000 votes, the victorious result has been that of Hasselblad, a company that on more than one occasion has been given the title of having the best cameras in the world. 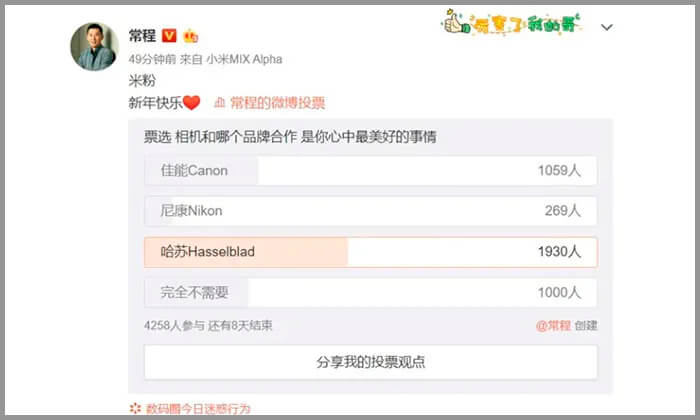 The point is that the victory of Hasselblad in this survey does not mean that Xiaomi is going to work with it, but it does show the interest of the manufacturer to improve their cameras or at least that they obtain the certification of some prestigious companies in the sector, which would give a better image to the public and, hopefully, improve the quality of Xiaomi cameras, which still fail to achieve the results we see by other brands, especially in post-processing their photographs.

This would be the same strategy that Huawei follows with Leica for years and that it ends up serving as a promotion, since a prestigious firm such as Leica certifies the manufacturer’s cameras. In this regard. How about you? Would you like Xiaomi to work with a camera manufacturer?

Next Facebook dark mode arrives on the Android application