OPPO will be launching its Find X2 premium smartphone by the end of Q1 2020. Although the brand has been teasing the phone for a month now, the specs and launch date are yet to be revealed. Nevertheless, multiple leaks have surfaced on the web over the past few weeks exposing new details about the phone. And now, a new leak reveals camera sensor details, display design, and the company’s first co-processor.

According to a tipster on Weibo, the OPPO Find X2 will feature a custom Sony IMX689 48MP primary sensor. This sensor will be 1 / 1.3-inch in size and will be larger than the 1 / 1.75-inch sensor base of the Sony IMX600 found on the Huawei Mate 30 Pro. Since it will come with a triple camera setup, the secondary ultra-wide lens will use a Sony IMX708 sensor tipped earlier as well. Whereas, the telephoto unit with 5x hybrid optical zoom will sport an unknown 13MP sensor. As for selfies, the device may come with a Sony IMX616 32MP front-facing camera. 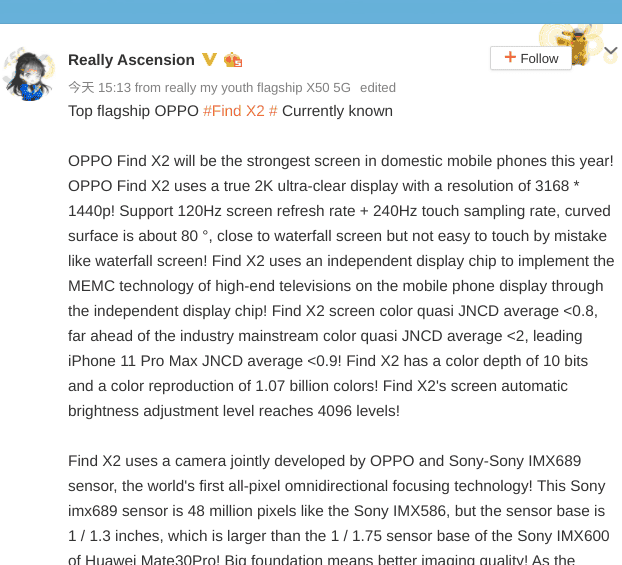 The same user also said the Find X2 will come equipped with a 2K QHD+ display with a resolution of 3168 x 1440 pixels. The panel will have support for 120Hz refresh rate as well as 240Hz touch sampling rate. The user also added the display will be not of waterfall type but it will still curve at 80-degrees on either edge. Further, he also confirmed the presence of Qualcomm Snapdragon 865 with Snapdragon X55 5G modem. Additionally, the phone will also feature the company’s first self-developed co-processor called OPPO M1 to fix power consumptions issues by Snapdragon 865.

It should go without saying that the leak should be taken with a fair dose of skepticism as should be done with all leaks. This a relatively low-key leakster and his tip might end up being wrong, although he does say that it is confirmed.