The 5G smartphone market is in its early stages, but Huawei and Samsung have already managed to place themselves at the top of the ranking of companies that have decided to invest in this specific segment. The Chinese producer is in first place and, slightly more detached, there is the South Korean giant. This is what emerges from the recent Strategy Analytics report on the trend of deliveries of smartphones compatible with the new generation networks.

2019 was the first year in which the 5G commercial offers were activated and, consequently, the first 5G smartphones were marketed. According to the source, the demand for 5G devices was higher than expected with 19 million units delivered in the past year. However, distinctions should be made on a geographic basis. Requests have been high in China and South Korea. While areas such as the United States and Europe are further behind than Asia. A gap that should close by the end of the year.

This explains how Huawei managed to conquer the top of the market with 6.9 million 5G smartphones delivered or 36.9% of the total. And how the Trump Government ban failed to scratch the manufacturer’s ability to establish itself in the emerging segment. Almost all Huawei’s 5G smartphones have been shipped to China, a market in which US sanctions have less impact. The absence of Google services and apps is not as penalizing for Chinese users as it is for western users. Huawei’s most popular 5G smartphones include the Mate 20 X 5G and the recent Mate 30 Pro 5G. 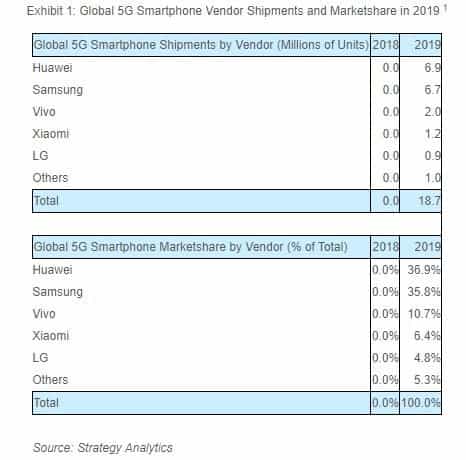 Samsung is in second place, in 2019 it delivered 6.7 million 5G smartphones or 35.8% of the total. Unlike Huawei, shipments were directed not only to the domestic market (i.e. South Korea), but also to other important international markets, such as the United Kingdom and the United States. The most popular models include the Galaxy Note 10 5G and S10 5G.

Different speech for the other companies that have started to explore the 5G market. They are much more detached from Huawei and Samsung . Vivo is in third place with 2 million units (10.7% share) distributed mainly in China; Xiaomi is fourth with 1.2 million units (6.4% share) delivered worldwide. Including Europe where it is making progress thanks to the Mi Mix 3 5G and agreements with the operators. LG closes the top five with 0.9 million units and a share of 4.8%, North America and South Korea are its main markets.

2020 will be a very important year for the growth of the 5G market. 5G network infrastructures will continue to expand and other important names in the smartphone landscape will make their debut in the market – one above all Apple with the next generation of iPhones. 5G smartphones will also make an important contribution to relaunching the smartphone market as a whole. This is after several quarters of stagnation.

Next Sony Xperia Flagship to Pack a Large 4400mAh Battery