The latest research report from Strategy Analytics states that about 19 million units of 5G smartphones were sold globally in 2019. Demand is much higher than expected. Huawei holds 37% of the global 5G smartphone market, ranking first while Samsung ranks second with 36%. Vivo’s share is 10.7%, ranking third, and Xiaomi’s share is 6.4%, ranking fourth. 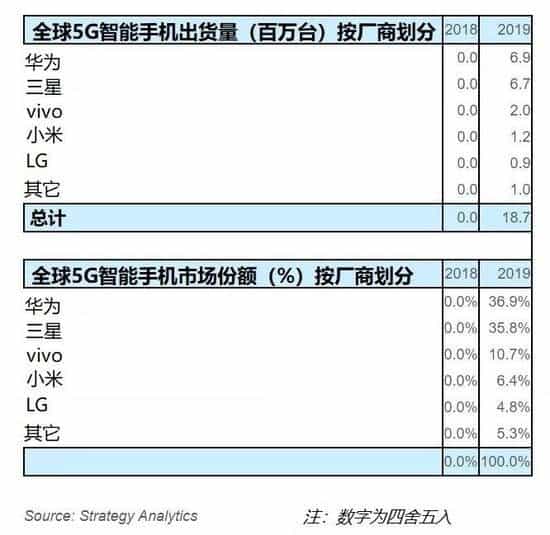 According to Strategy Analytics, “Global 5G smartphone shipments have grown from zero in 2018 to 18.7 million units in 2019. The market demand for 5G smartphones is much higher than expected. Fierce competition from Chinese manufacturers and substantial subsidies from South Korean operators has been the main driver of 5G demand. Other regions such as the US and Europe lag behind Asia, but we expect them to close the gap with Asia later this year.”

The research agency also believes that the upcoming 5G models of Apple iPhone and other big brands mean that 5G will become the hottest part of the global smartphone market this year. However, the recent panic of the new coronaviruses is currently restricting trade in some parts of China, which may lead to a slowdown in Asian or global 5G supply and demand in the first half of 2020. Industry players should be prepared for the surge in 5G sales in some markets