Yesterday, the British research institute Canalys released a new report on the Chinese mobile phone market. The report shows that in 2019, Huawei kept its leading spot in the Chinese smartphone market with a market share of 38.5%.

Huawei Dominates the Chinese Market, Other Brands Cannot Keep Up 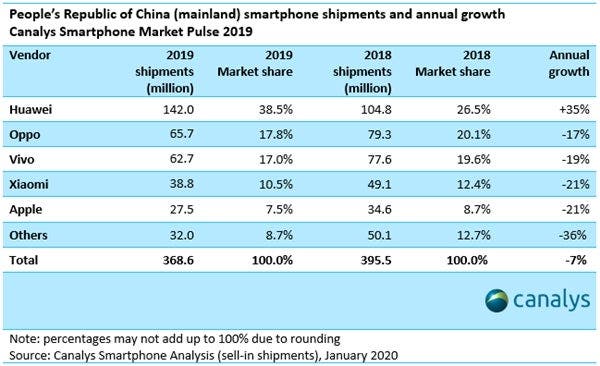 Following Huawei, in the second to fifth place we find: OPPO at 17.8%, Vivo at 17.0%, Xiaomi at 10.5% and Apple at 7.5%. The five phone manufacturers above have monopolized more than 90% of the market. With the market share of the remaining phone brands getting extremely reduced; it now accounts for only the 8.7%.

The report shows that for the whole year 2019, “only” 369 million smartphones were sold in Mainland China; a 7% year-on-year drop. However, Huawei managed to go against the flow. The company did indeed see mobile phone shipments go from 104.8 million in 2018 to 142 million in 2019; a 35% increase over the previous year. 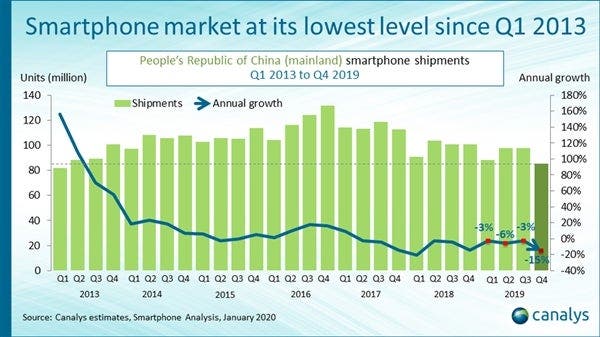 Taking a closer look, we see that in the fourth quarter of 2019, the Chinese smartphone market shrank by 15% year-on-year; with an overall sale of 85.3 million units. This is the 11th consecutive quarter in which we see a decline in the Chinese mobile phone market.

Additionally, in the fourth quarter of 2019, Huawei’s mobile phone shipments were 33.3 million, with a market share of 39%. Meanwhile OPPO, Vivo and Apple shipments counted between 10-14 millions. Finally Xiaomi ranked fifth with 810 million phones shipped and a market share of 9.5%. 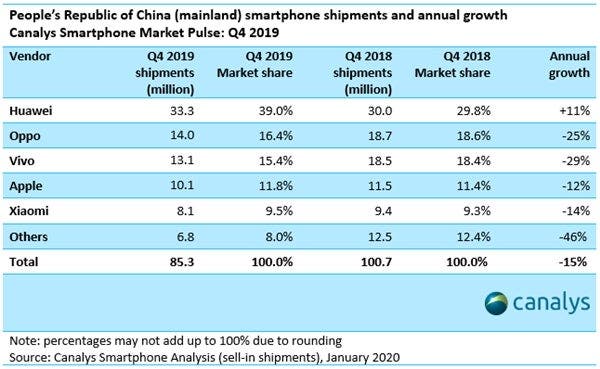 So, Huawei appears to be the only brand actually growing in China, which is quite surprising to see. That said, most brands on the list have seen a great growth outside of the Asian country, thus we can’t really say they’re doing “bad”.

What do you guys think about Huawei’s leadership? What are the reasons behind their success? Let us know in the comments section below!

Previous Huawei exceeds Apple in number of smartphones sold in 2019