Despite U.S. sanctions, Huawei came in second place in 2019 smartphone sales, ahead of Apple. Samsung maintains its number 1 spot.

The smartphone market is today one of the most important markets in the world. Inside, three giants are competing: Samsung, Apple and Huawei. And if Samsung retains the first place, it seems that Apple is being overtaken by the Chinese manufacturer.

Indeed, Apple’s solid fourth quarter was not enough to surpass the Chinese challenger. Huawei overtook Apple to become the world’s second-best-selling smartphone maker in 2019. This is according to reports from Strategy Analytics, Counterpoint Research and Canalys. During the year, the Chinese manufacturer would have shipped around 240 million phones, against just under 200 million for Apple. Samsung maintained its comfortable lead in the first place, with just under 300 million devices sold. Xiaomi and Oppo complete the list of the top five manufacturers.

Huawei got a significant national support 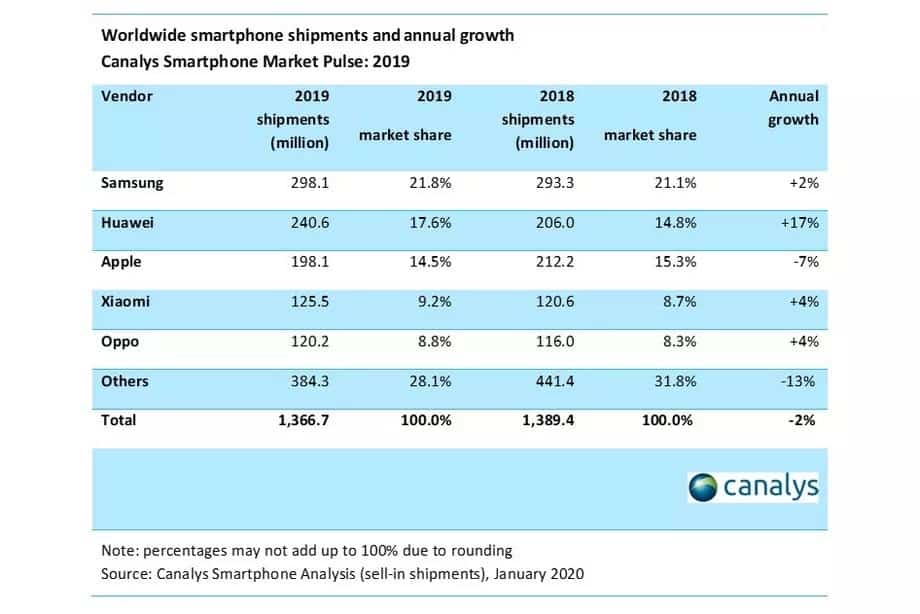 This jump in sales is all the more surprising given that Huawei’s ban is continuing by the Americans which prevents the company from installing Google’s applications and services on its new devices, which limits their appeal outside of China. Suddenly, the main force of Huawei is in its country of origin, according to Counterpoint Research, China accounts for 60% of its sales, which allows its worldwide shipments to increase by 17% between 2018 and 2019.

However, tensions with the United States have had negative effects. The Canalys report notes that 2019 could have been the year that Huawei could have challenged Samsung for the number one spot. But due to restrictions in many Western countries, this scenario did not happen. To fight these restrictions, Huawei is preparing an ecosystem of applications to compete with Apple and Google.

Although it lost second place for the whole of 2019, Apple had a very solid fourth quarter, as is often the case. The three market analysis firms agree that it managed to sell more than Samsung in the last quarter, sales being notably stimulated by the price of the iPhone 11.

Next Huawei Dominates the Chinese Market, Other Brands Cannot Keep Up