POCO is gearing up for its upcoming launch event where the company will unveil its next-gen smartphone dubbed POCO X2. The X2 is going to be the successor of the previously launched POCO F1. For those who’re unaware, the official launch is set for February 4 in India which is right around the corner. The smartphone has already been a part of numerous leaks for the last couple of weeks. As expected, every single leak reveals information on the device in bits.

POCO X2 to Come in 6GB and 8GB RAM Variants 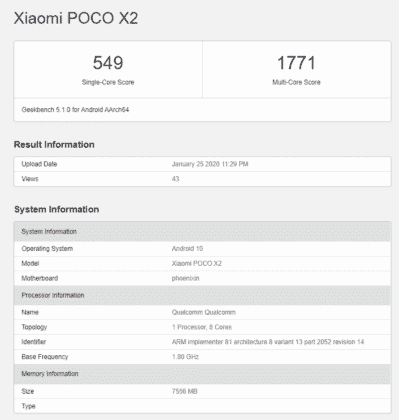 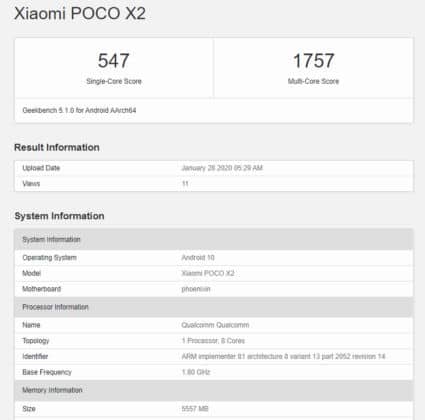 Well, the smartphone has once again been leaked. Poco X2 has made its way to the GeekBench listing yet again. This time we’re looking at two different RAM variants of the device. The GeekBench listing has confirmed that the device will come in 6GB and 8GB RAM variants. As per the listing, both the variants feature an unnamed chipset with a clock speed of 1.80Ghz. This point towards the Qualcomm Snapdragon 730G SoC. On the software front, both the variants will run on the latest Android 10 operating system.

Coming to the benchmark scores, the 6GB RAM variant managed to score 547 points in the single-core test while it scored 1757 points in the multi-core performance. The 8GB RAM, on the other hand, scored a slightly higher 549 in single-core and 1771 in the multi-core tests. It is worth mentioning that multicore scores shown here are a bit higher meaning the scores might have been tampered with. With that said, it is confirmed that the device will come in 6GB as well as 8GB RAM variants.

Considering previous leaks and teasers, the upcoming POCO X2 will come with the following mentioned features.

Next How to install Gcam 7.3 mod in all Android smartphones