Apart from its first fitness band, Realme is also working on a budget smartphone dubbed Realme C3. As the name suggests, it is a successor of the previous-gen Realme C2 smartphone. Realme C3 is scheduled for the official launch on February 6 which is right around the corner. In fact, the official Flipkart page of the phone is already live. Ahead of the launch, the smartphone has now surfaced on the GeekBench listing. As with any listing, we now have some key information on the upcoming smartphone. 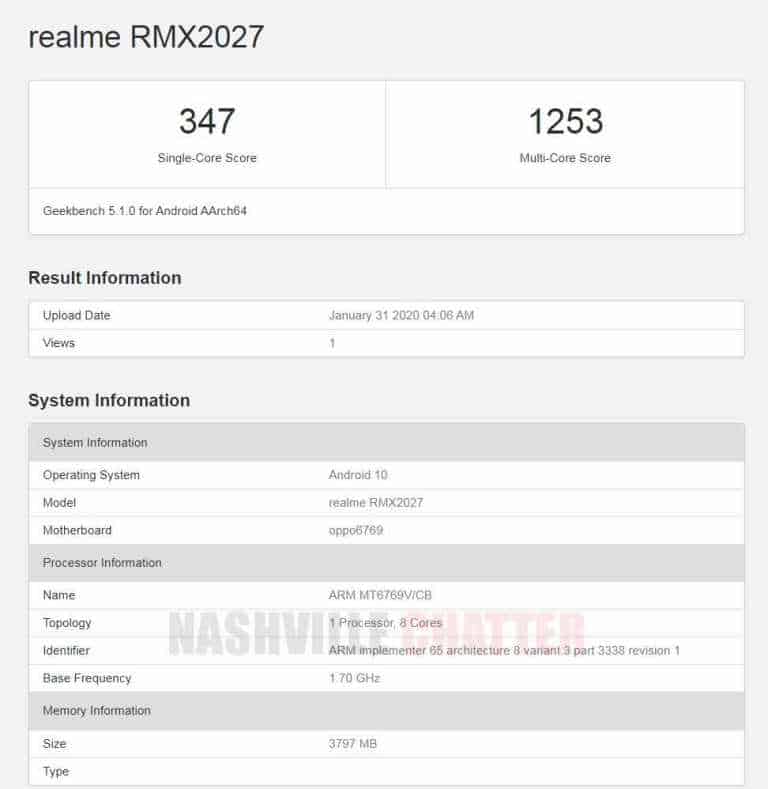 Realme C3 has appeared on the GeekBench with the model number RMX2027. The same model has been leaked earlier numerous times in certification platforms such as BIS and EEC. Although none of the listings clearly mentions the name Realme C3, there is a high chance that the phone will end up launching with the C3 moniker.  Coming to the listing, the device is seen running on an MT6769 chipset with a base clock frequency of 1.70GHz. Well, this chipset is nothing but the recently launched Helio G70 SoC. For those who’re unaware, this chipset will bring some decent gaming capabilities at entry-level devices.

Furthermore, the device will run on the latest Android 10 operating system. Lastly, the chipset is paired with 4GB of RAM packed inside. Coming to the Benchmark scores, Realme C3 managed to score 347 in the single-core test and 1253 in the multi-core performance.

As mentioned earlier, the official Flipkart teaser page of the product is already live in India. As per the teaser, the device will come with a 6.5-inch display with a screen-to-body-ratio of 89.8%. The display will also have a layer of Corning Gorilla Glass for added protection. The teaser page also confirms the presence of Helio G70 chipset inside. The device will have a dual-camera module at the back with the primary sensor being 12MP. Lastly, the device will be backed by a massive 5,000mAh battery.