Back in December 2019, Realme’s CEO Madhav Sheth revealed the fact that the company is indeed working on its first fitness band. Realme fitness band has since then been revealed in part by the CEO himself. At the recent Realme 5i launch, Sheth gave us a sneak peek of the upcoming band’s yellow color strap. Well, the band has now been leaked for the first time by the folks at Beebom. Here’s the first look of the Realme’s upcoming fitness tracker.

Realme Fitness Band Design Leaked Ahead of the Launch 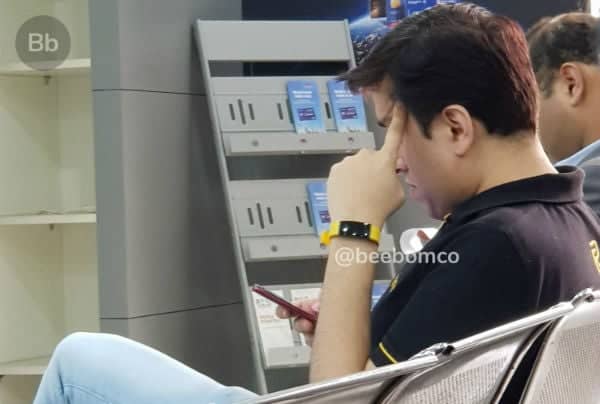 Realme’s CEO Madhav Sheth was recently spotted wearing the upcoming band at the Spanish Visa office in New Delhi. We’re looking at the same yellow-colored strap which was revealed a couple of days ago. As you can see in the image, the fitness band comes with a rectangular display. Since the display is off, it is unclear whether it will come with color AMOLED panel or not. Considering the competitors, we should expect the colored display panel. Furthermore, we’re looking at the touchscreen display since no physical button can be found.

The yellow strap is connected to the display body just like with the Fitbit Inspire and Honor Band. The Mi Band, on the other hand, has straps wrapping around the display which is not the case here. For now, we don’t have any information on the internal hardware of the fitness tracker.

At the time of covering this, we have limited information on the pricing and availability as well. The upcoming Realme fitness band will launch next month in the Indian market. For those who’re unaware, the smartphone maker will launch its budget Realme C3 smartphone on February 6. We might see the company launching its first fitness bang along with it. If that’s the case, then more information should start floating around the internet in the coming days.